Earlier this year, Super League and Challenge Cup winning 22-year-old pro rugby league star Stevie Ward launched Mantality, an online male lifestyle, sports and mind title to address the issue of mental health in sport. Three months on, Ward talks to Gorkana‘s Louise Pantani about how his own experiences in professional sport fuelled the idea for Mantality, how it fits in with his time at Leeds Rhinos, the challenge of writing for the “millennial male” and his dream of interviewing Ricky Gervais. 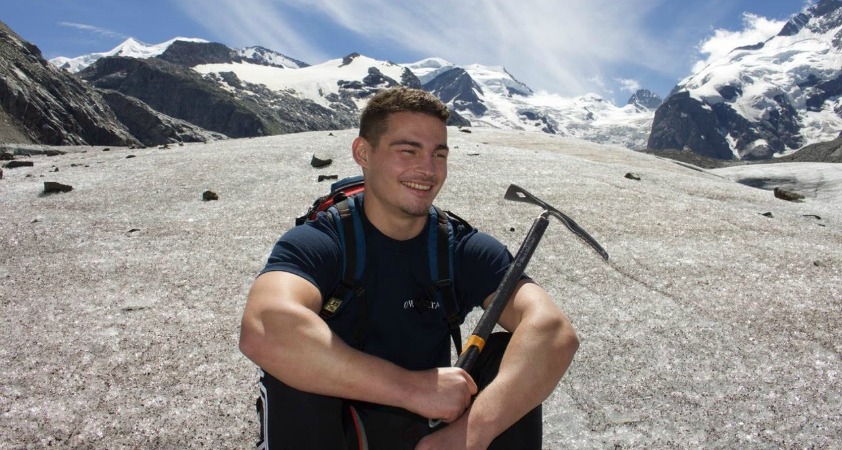 Where did the idea for Mantality come from?

I had a realisation about five months ago. In my rugby career, I have been on quite a unique merry-go-round twice. I would play for a spell and win a major trophy – then I would pick up a serious injury. I would then have a very long stint of rehab and training before returning to play and win something again.

I realised that I didn’t just have to be on the same track all of the time and I could go and do something special on a different path. Something a bit unconventional and out there. In rugby, you can go from ultimate physical prowess competing at Wembley stadium to simply trying to get back walking again…This isn’t healthy! Mantality is an avenue to vent my constant drive. It allows me to grow, learn and help people.

You’re also a professional rugby player for the Leeds Rhinos. How does Mantality fit in with all of the training and games?

I am just on the cusp of returning to playing. But I have been injured for 11 months. So a normal day would be getting treatment on the physio table at around 8am, working in the gym at about 9am, then I undergo rehab for my knee on the field. Then it’s lunch and Mantality straight after! But I love the balance and the new job!

What made you decide to pursue a separate career in media?

It’s different! Being out injured so long means it can be hard to vent your focus on just solely getting your knee better! It can’t work like that. You need something else going on. I feel like I’ve got a good direction for how I want to live and make the most of life, I want to help people, and I love writing! So Mantality seems to be the perfect platform! The opportunity to learn from successful people and meet a set of new and diverse characters is so exciting!

There is such a mix of content on Mantality. How is it different from other sites for men?

Mantality has a massive focus on mindset. To me, this has got to be the first point of call. There is a slow burning appetite for people to discuss mental well-being, but also how to get the most from life. Our category (on the site) of Mind directly addresses that. Some of the articles can feature tips and advice from legacy-leaving athletes, MBE’s, world famous celebrities and ex-SAS sergeants. We also don’t apologise for brutally honest tales of how mental well-being can be in a bad state. Content on Mantality doesn’t scratch the surface. It’s deep and, because that is so rare, it’s riveting.

Who is the target demographic?

This is the millennial male. Let’s say the first point of call is your mind. Then it’s about what you are going to go and do. If you are interested in a conventional, straight forward life then Mantality probably isn’t for you. But if you rate moments over material and want to go out there and “kill it”, we will inform you and do it with you.

I feel like I’ve launched myself into something exciting. I had to reset my dreams as I was so lucky to have accomplished the childhood ones I had. I have managed to win trophies an Old Trafford and Wembley, so now I have had to reset my goals. So I guess we are speaking to people who want to go out there and get it.

What has traffic to the site been like since the launch online?

We have had 205,000 page views since the launch in May. Of course we want to keep growing and growing. For years millennials have been interested in how they look, what gym they use, what they eat. I think ultimately, it’s now time to consider how we feel.

This is obviously a very personal project for you, did you expect the amount of coverage you received? For instance, the article in the Daily Star?

I definitely thought it would have been more of a slow burner. I am in talks with The Sunday Times Magazine regarding a feature at the moment. I have had features with the BBC, Sky Sports and The City Talking. This coverage cannot be bought and I’m so grateful for that, but the main thing is through this I can help people and make a difference.

What is it you are looking for from PRs at this stage?

We do look at uploading content when provided if it’s in alignment with our ethos. We can’t justify stuff just for click bait. We pride ourselves on being a ‘real’ and honest magazine. But then it works great because stuff which we do use, is vouched for by me and Mantality!

I guess we are looking for anything exciting. Even better than that, remarkable. Stuff that ties in with the theme of well being, mindset, drive, travel and exploration is really what we are excited about. There are many different things: music is big for us and so is fitness. But don’t send me a press release on how to look like The Rock in 14 days!

You’re holding a launch party on 14 September. How can PRs help you in the run up to that?

Just get in touch with me personally at [email protected]. It should be an interesting guest list with the athletes and celebrities who are supporting it. We are hoping for it to be a very special night! If you have clients or would like to see what it’s all about yourself get in touch! We are holding it at the awesome Banyan in Leeds.

What is the best way for PRs to really get your attention?

I think that travel is really becoming a natural progression for us. Every part about travel works with what we are trying to get across. We have already been to South Tyrol and Switzerland so we are ready to immerse ourselves in the travel field. The reaction we have had to those has been great. We want to be bold and exciting, so anything that is in alignment with that, try me!

Would you ever expand the platform to print, or will you stay online?

Online is working so well at the moment, we are looking at growing this further and evaluating in 6 months time. Print is a big goal which I do have, it will be interesting to look at further down the line.

Finally, if you could interview anyone in the world for Mantality, who would it be?

That is such a hard question. On a personal level I would love to meet and interview Ricky Gervais, but I would also love to dissect the success of someone like Kendrick Lamar or Kanye West. What little things do they do which have made them who they are today and what is ‘fulfilment’ to those guys?

Meet the Journalist: The Brighton Beezer publisher, Ilana Fox
Ilana Fox, the woman behind The Brighton Beezer, tells Gorkana’s Ona Zygaviciute about why she launched the publication, what makes it unique – and the role print journalism [...]
Interviews
Request a Demo and Pricing
Connect on Social:
Behind the Headlines with Time Inc. UK’s Holly McNally 60 Seconds with Manifest CEO Alex Myers
Scroll to top
Cookie Policy