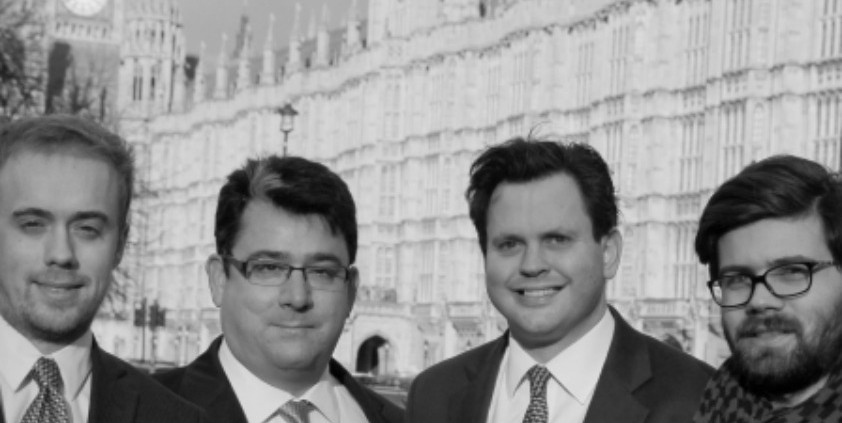 Guido Fawkes’ editor Paul Staines, political correspondent Alex Wickham and tech reporter Jeremy Wilson on the launch of Techno Guido, running a million miles from anything po-faced and why politicians should be held to higher standards.

Where would you position Guido in 2015?

Alex (pictured left): We’re a news website, really. We have branched out into so many different strands, but we’ve still kept that old fashioned blog style, running news stories as they come in, one-by-one down the side. That’s our heritage.

But there’s a lot of content now, and coming up to the election, we’re breaking news and doing 15+ stories a day across different fields.

Paul (pictured second left): The difference between now and five/ten years ago is that we’re not doing straight politics. We’ve had to go into these vertical niches. When Alan Rusbridger resigned, that was big news, but half of our readers wouldn’t care. So we put that aside and physically separated it. For the people just interested in the Westminster gossip, they’re not going to have to read about changes at the Guardian or in the media.

Can you talk us through the launch of Techno Guido?

Jeremy (pictured right): The general quality of tech reporting is low. A lot of people that write about tech at the moment don’t understand what they’re writing about, and it’s probably not their first choice of job, to be honest. I love technology, and there are just so many interesting things at the intersection of technology, like society and politics. No-one has really touched on these intersections before.

Paul: It’s a huge growth part of the economy. Lots of tech companies have got big operations in Washington – such as Facebook. Over here, you have the EU having a go at Google, you have the question of taxing Amazon…

There are a huge number of PR clients in the field, and we are happy to get new gadgets from them! PRs can be an information source and help us with getting hold of people, rather than pulling the wool over our eyes. The good ones know that. The worst thing they can do is lie.

What kind of content will you be running closer to Election day?

Paul: We’ll be doing more video. To differentiate ourselves, whilst everyone has cameras pointed towards the stage, we’ll be pointing the cameras the other way. Our readers would love to see Nick Robinson scratching his arse, for example. We are about Westminster Village, so that kind of niche take appeals to our readers.

Paul: There’s a hell of a lot of them nowadays. Any one day, 100,000 is the typical readership. Some people will just come onto the site when we send out our summary email on Thursday, and some people are on it all day, every day. Over the month, we have around half a million devices. Our readership will probably double during the Election.

The readership is two thirds male, affluent, older and politically more to the Right. The people in the comments don’t represent our readership. Two years ago we looked at the comments in detail, and there are half a million comments in a year; 250,000 of those were done by 50 people.

There’s also the Westminster/Whitehall crowd. There’s the special adviser class and politicians who read it. As David Cameron said at our tenth anniversary, he’s a daily reader. Harriet Harman might deny it, but I can tell you she knows what’s going on with the site. That’s why we can charge the premium advertising rates we do because they want to be close to that crowd.

According to research done by Ipsos Mori in 2014, 65% of politicians read Guido.

Why is there a hesitancy to joke about politics in the mainstream media?

Alex: That’s why Guido was so successful at the start because everything else was so dry and worthy; people would write 1000 word analyses of things even if it was quite a light-hearted event. There is so much in politics that is entertaining. When Natalie Bennett has a car crash interview on the radio, people just want to watch/listen to it and read two lines explaining what it is. We can do that in a way that newspaper websites can’t do.

Paul: We’re in the infotainment business. Politics is showbusiness for ugly people. We don’t write about the geopolitical strategy for dealing with ISIS. I’m not interested in a 23-year olds’ opinion about Iran. I want hard news, and gossip is tomorrow’s news.

Do you think it’s the media’s responsibility to get voters more engaged with politics?

Paul: I don’t think so. Most British journalists would be very sceptical about having that role. I know that TV broadcasters have a public service responsibility but British journalists won’t stand up when the Prime Minister comes in, unlike in the States or the rest of the world. We run a million miles away from anything po-faced.

Does increased personal scrutiny on politicians dehumanise them and homogenise the political message?

Alex: That is the whole point. The essential role of what we do is to hold politicians to account and shine a light on them. Sunlight is the best disinfectant.

Paul: You have to hold them to higher standards. They are law makers, and therefore can’t break the law. We have to trust them. If you are the kind of person who will lie to your wife, you will definitely lie to voters. It’s a very common overlap between the kind of people who have personal and professional failings. Leadership is about character.

Alex: Some people get po-faced about scrutiny of politicians’ sex-lives, saying that it’s none of our business, but it is. There is a massive public interest if a politician is cheating on his wife.

Has comms improved since the last Election?

Paul: We have relationships with the teams from all of the parties. The Tories have more press officers than you can count, half a dozen of which seem to cover us.

It’s neck and neck between UKIP and the Lib Dems as to whose comms teams are the worst. To be fair to them, UKIP spend most of their time firefighting and they should be more proactive. They don’t have a strategic view. The Lib Dems don’t really understand the media. Clegg’s people are all civil servants.

We have a business relationship with the senior communications people in the Labour party. I think it’s partly because the younger press officers are a bit nervous about dealing with us.

It’s clear where we come from politically. They tend to give us other stories about the other parties. They know not to ask us for a positive story, but if they have dirt, we’re happy to recycle that.

Do you think broadcasters in this country should be able to nail their colours to the mast, as in the US?

Paul: Definitely. No one can be impartial. The public know that – they’re not stupid. Why do people buy papers? It’s to confirm their prejudices.

What is the most important medium during this election campaign?

Paul: It’s TV. It’s not a Twitter or Facebook election. The only thing that has changed in political reporting is that Twitter is the immediate echo-chamber.

Alex: You can shape the narrative on Twitter. The Emily Thornberry story is an example; no broadcast journalist was particularly bothered by that tweet, but that story gathered pace online, and by the end of the day she had been sacked. That is a Shadow Cabinet resignation that would not have happened without Twitter. But you can’t beat television. You can’t tweet about something quicker than it can be said on the television.

Paul: I think people on Twitter who are interested in politics have made up their minds. Most people on Twitter just want to tweet about football or Coronation Street or those kind of things. If someone says something on Twitter, it won’t be deep analysis in 140 characters.

I’m sceptical of social media’s influence, because we heard all this in 2010. But if there is going to be a Twitter screw-up, I hope we’re there at the centre of it!

What outcome will we wake up to on 8 May?

Paul: It’s too close to call. I’ve bet on every election in my adult life the right way, and I’m not betting on this one.

Meet the Influencer: supercar vlogger Mr JWW
From racking up 37 million views in 14 months to discovering the “world’s best driving road” – Mr JWW reveals how he has become one of the internet’s biggest [...]
Interviews
Request a Demo and Pricing
Connect on Social:
Behind the Headlines with Alex Clough