Amy Hitchcock, entertainment producer at Sky News, on launching a new programme, providing those water cooler moments and why you can be intelligent and still have a healthy appetite for showbiz.

You’re the entertainment producer for Sky News’ half hour Friday night show, Entertainment Week, which launched in April – describe it in five words. 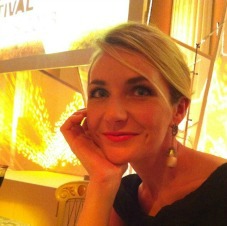 Tell us about your role.

I pitched the show in September last year and it took a lot of hard work to actually get it to air. Sky News is a big operation and news events can change priorities overnight, so you have to be flexible and resilient but it’s been an amazing learning curve. Having associate produced Parkinson at ITV and spent seven/eight years at Sky, it was great to learn new things from different areas of the business such as compliance, sponsorship, graphics, promos and music rights, plus creating the look from commissioning the set build to the titles has been really satisfying.

Weekly, I’m not only responsible for all the show’s content (including VTs, scripts and guests), but I often have to go out and film it and edit it myself. It’s hard work, but very rewarding. I have a really small team but we’ve really pulled together and it’s been brilliant fun, (it would never have worked without my presenter Lucy Cotter, editor Chris Scott, reporter Joe Michalczuk, pundit Steve Hargrave, and producer Charlotte Bingham!)

The entertainment show market is pretty crowded – what makes Entertainment Week stand out?

There are lots of chat shows and a few magazine shows, but no real entertainment news shows for intelligent people who love showbiz (you can be intelligent and have a healthy appetite for showbiz!). The choice is usually either very fluffy or uber highbrow, so I wanted to create a show that gets the balance right… it’s still early days.

Who is the typical viewer and what sort of content appeals to them?

This show is attracting a younger more female audience which is great. Whenever I’m deciding which stories to include and how to cover them, I ask myself whether my mum and my best friend would care. They’re both intelligent women with an interest in entertainment and the arts, from Kate Bush to Joey Essex and Grayson Perry – so they give me a good gauge.

Sky has always had a reputation for breaking major news stories – has this philosophy carried to Entertainment Week?

Some of the biggest stories for Sky News in recent years have been about celebrities, such as the untimely deaths of Amy Winehouse and Michael Jackson, so the show has become another great Sky News platform through which to tell these stories (alongside the main TV channel, skynews.com, and digital services).

I’ve managed to get some news-making exclusives this year, involving Sir Paul McCartney, Elton John, Daniel Radcliffe and Kylie, so it’s great to be able to use this programme to increase their prominence further.

Entertainment news also provides some of the best ‘water-cooler’ moments, so amid the hard news coverage, you often really need something like the leaked photo from the new Star Wars film to offer some light relief.

So far I’ve been really impressed with the willingness of PRs and celebrity guests to get involved in the rest of the show – the bit where we discuss the week’s top entertainment-related stories, such as Rik Mayall’s death, the sentencing of Rolf Harris or whether Metallica was a good booking for Glastonbury.

Often celebs just want to plug their film/book/record, and having produced Parkinson, I know how tricky it can be to make a celeb interview engaging and relevant, while not expecting the guest to sacrifice their privacy or comment on the situation in Iraq if it’s not appropriate. So we work to encourage them to give something more than a sound bite selling their latest film.

So far, the likes of Hugh Bonneville, Tinie Tempah and Sophie Ellis Bextor have been really up for contributing to the rest of the show and commenting on the week’s stories, as well as talking about their new film or album, so it’s been great.

B-roll is always useful, and being able to provide HD quality clips of films and shows, I spend my life chasing clips!

I benefit from the fact I’ve been making entertainment shows for more than 10 years, so working with the guys at Freud on Bafta, film companies including Sony and Warner, and pluggers like Niki Sanderson at Nonstop or Helena McGeough at Universal is always a joy.

The tricky situations are always with people I’ve not worked with before, and to do with editorial control and expectations and honesty – but things always work out ok in the end!

What should PRs be thinking about when pitching ideas?

News-lines and how their client’s project could chime with other newsworthy events – such as asking an actor about arts cuts. I feel it is better, rather than banning certain questions from an interview, for a client to be briefed on how to handle them.

Anything they need to keep in mind for TV?

Pictures are always needed to illustrate an interview.

How far in advance do you plan content and are there any key meetings for PRs to note?

Sometimes the day before, and some names are booked months in advance so it depends on how news-busy the week is.

Who is the best person to contact when PRs want to pitch?

Me. When I’m on maternity leave later this year, my presenter/correspondent Lucy Cotter is amazing, and Michael Blair will be in charge of the entertainment desk in my absence.

And finally, you’ve already featured some impressive guests, including Angelina Jolie, Zac Efron and Johnny Depp – who is on your wish list?

Meet the Journalist: The Brighton Beezer publisher, Ilana Fox
Ilana Fox, the woman behind The Brighton Beezer, tells Gorkana’s Ona Zygaviciute about why she launched the publication, what makes it unique – and the role print journalism [...]
Interviews
Request a Demo and Pricing
Connect on Social:
Gorkana meets…The Sun’s environment editor