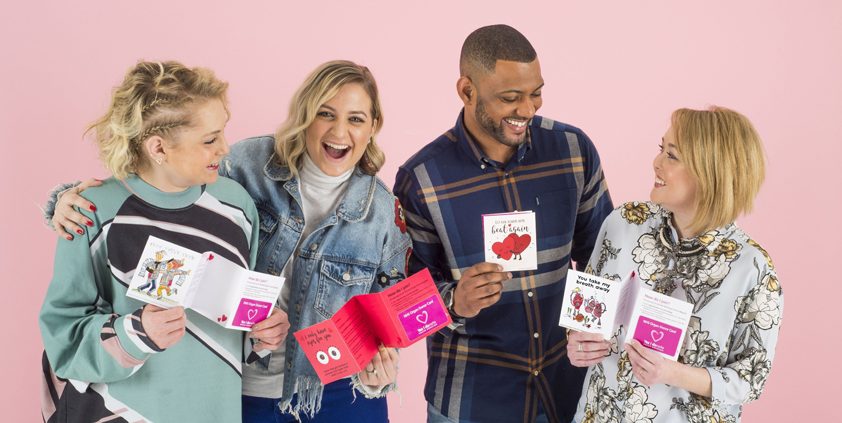 Brands2Life helped Moonpig’s Valentine’s Day cards to stand out by forming a partnership with NHS Blood and Transplant to send organ donor cards to loved ones.

Some cards mean more than others. To help Moonpig stand out from the crowd on Valentine’s Day, Brands2Life formed a partnership with NHS Blood and Transplant to allow customers to swap their usual Valentine’s card for an organ donor card. The cards encouraged people to sign up to the organ donor register and, crucially, tell their loved ones about the decision.

Moonpig briefed Brands2Life to deliver a socially-driven Valentine’s Day campaign which would help them stand out from the crowd. The campaign needed to reflect Moonpig’s brand positioning; heart over humour, but with a touch of Moonpig’s trademark cheekiness.

The campaign needed to:

Moonpig’s brand is based on a delicate balance of heart and humour. Having devoted its previous two campaigns to ‘haunted’ gin and edible stationery, Brands2Life decided to go back to the brand’s heart with this Valentine’s campaign.

Focusing on cards, the most well-known element of Moonpig’s offering, Brands2Life settled on the creative platform of ‘giving a card with heart’. With debate in the news about moving to a system of presumed consent for organ donation in England, Brands2Life wanted to see if there was a way to offer two really important cards in one; a Valentine’s Day card which also signed you up to the organ donation register.

The agency approached NHS Blood and Transplant with the idea and during the initial conversations it became clear that the cards could perform two, equally important, roles; enrolling more Britons onto the NHS organ donor register and igniting a conversation between loved ones sharing their donation wishes.

This conversation matters to NHS Blood and Transplant because organ donation doesn’t go ahead without a family’s support. The partnership formed quickly, with Brands2Life providing creative direction on the limited-edition range of six free cards. These were aimed to prompt couples into kick-starting a conversation on the awkward subject of what happens should something happen to one of them.

The cards were designed to break the ice by reimaging classic love lines. These included: “I only have eyes for you…. unless they get donated to someone who needs them – which is also cool” and “Urine my heart, urine my soul… but one day my kidney may be in someone else.”

To give the campaign a human face, two of the cards were designed by people directly involved in organ donation: Jess Harris, a Londoner waiting for a kidney and pancreas transplant, and Kimberly Chard, who has cystic fibrosis and had a double lung transplant in 2015.

To reach a key Moonpig audience and help give the campaign a boost on social, Brands2Life got the help of ex-JLS star JB Gill and his wife Chloe to design a card. The couple had a personal connection to the cause, and they took part in a photoshoot, interviews and social media posts explaining how organ donation was a topic close to their hearts.

Each card included a cut-out organ donor card and directed people to the website to sign up. To ensure further reach across all channels, Brands2Life also created assets for social media channels, including a humorous video asking couples about their favourite parts of one another’s bodies, and imagery of the cards and designers.

The campaign aimed to kick-start 6,400 conversations with the free cards – one for every person in the UK currently waiting for an organ transplant. As the campaign was focused around Valentine’s Day there was a small ten-day window to activate the campaign before this calendar date.

Moonpig’s website received over 11,695 unique visits, double the original target. Consumers purchased a total of 618 cards and 262 people signed up to the organ donation register as a direct result from the trackable link from Moonpig in the space of a week.

NHS Blood and Transplant reported a significant uplift in both traffic to their website and organ donor sign ups over the ten-day period the campaign ran, compared to the previous year (with similar levels of marketing activity, though the activity cannot be attributed to one sector of marketing mix).

The campaign positioned Moonpig front-and-centre for Valentine’s Day with over 300 pieces of coverage, 100% including reference to Moonpig and 98% including Moonpig branded visual assets. The partnership generated some brilliant opportunities for landing the message of having ‘that’ important conversation with a loved one; kicking off the conversation was a four minute, dedicated interview with the card designers on Sky News Sunrise, as well as further interviews for the designers.

The video also got people talking, with over 530,000 views on Moonpig’s Facebook page and huge engagement levels on social with all platforms seeing significant increases of engagement and reach:

Moonpig and NHS Blood and Transplant both supported the campaign on their own platforms, including social channels, newsrooms and blog posts and internal channels with newsletters, email signatures and ‘lunch and learn events’. These activities added to the campaign’s reach.

Opinion: Why “PR” is having a renaissance
Brendon Craigie, co-founder and managing partner at Tyto PR, examines why PR professionals are once again adopting the PR moniker. The public relations industry is in the [...]
News Analysis
Request a Demo and Pricing
Connect on Social:
Case Study: The Christmas in July Festival