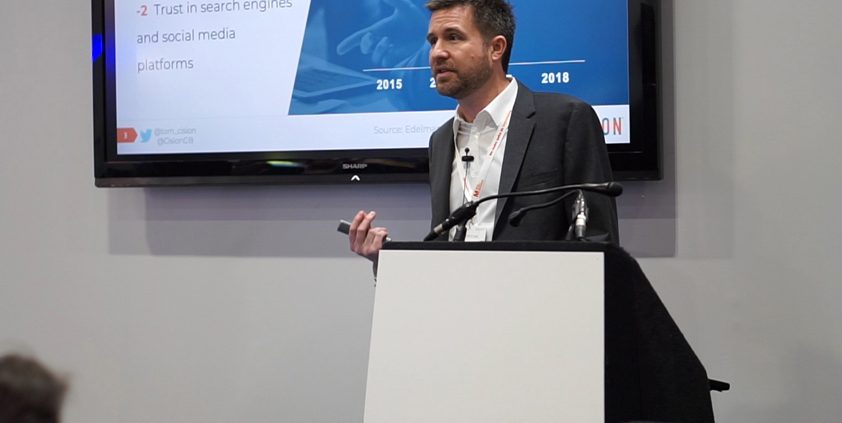 Delivering a keynote speech at the B2B Marketing Expo in London’s ExCel Centre, Ritchie discussed how cloud software like the Cision Communications Cloud will enable earned media practitioners to broaden their outlook when it comes to campaigns.

“We’ve moved from data silos and point solutions to collective cloud solutions which enable us to look at our data holistically and benchmark it alongside our other data sources,” he explained.

Citing a study by Outsell, Ritchie noted that 80% of senior marketing professionals believed earned media is as or more effective than paid media. However, he said the 2017 Global Comms Report found that around three quarters of comms professionals say that they need to do a better job at showing ROI, while almost 70% said that they lacked the data to do so.

He argued: “I believe that 2018 is the year where earned media shifts from vanity metrics to business ROI. As we’ve seen, earned media continues to have a bigger impact on people’s affinity to brands. That’s only going to continue.”

To illustrate the impact data is already having on PR campaigns, Ritchie cited two examples where campaigns were linked back to demographic and sociographic data to inform which audiences brands should be targeted.

The first involved a printer manufacturer which had been targeting tech media. After gaining coverage, it found there was little impact on people buying their printers. However, a women’s magazine published one story that led to sales going through the roof.

“The reality was that the majority of people buying printers are doing it to print off their kids’ homework,” said Ritchie. “Now, by bringing the data together, this allows us to get great insights to inform future campaigns.”

He also recalled how a company selling a digital baby monitor found that their outreach to new parents made little difference to sales figures. However, by analysing data, it found there was a spike of people around 65 buying the product for their grandchildren. Again, this enabled the company to adapt its media outreach to target a different demographic and improve business performance.

Delving further into the difference between paid and earned media, Ritchie stated that both Nielsen’s Global Trust in Advertising Report and the development of ad blocking software illustrated that audiences are becoming more resistant to advertising.

“When you ask audiences, even in the advertising world, it is very clear that earned media channels – recommendations, pieces of editorial content, the opinion of friends and those we know – clearly impact our perception of brands,” he said.

The impact of fake news

On the issue of trust, Ritchie discussed the importance of brands understanding the impact social media channels were having on their audience, particularly in relation to fake news.

He said the Facebook and Cambridge Analytica story illustrates how important it is for brands to work with social platforms to build trust with their audience, noting that the equivalent of Serbia’s GDP has been wiped off the social network’s value following the revelations.

Ritchie added that the launch of Google’s News Initiative, which is designed to help validate stories from traditional, trusted journalists, would also have a big impact on earned media practitioners.

He noted that this year’s Edelman Trust Barometer found trust in journalism has risen by 5%, with a steady decline of trust in social media platforms. Ritchie predicted that this decline will be even sharper in next year’s survey after the Facebook and Cambridge Analytica revelations, increasing the importance of the validation earned media provides.

Tom Ritchie was speaking at this year’s B2B Marketing Expo at the ExCel Centre. Cision is exhibiting across both days. Find the team at stand B1524 to learn more about how we can help you target, distribute and measure the impact of your campaigns.

Opinion: Why “PR” is having a renaissance
Brendon Craigie, co-founder and managing partner at Tyto PR, examines why PR professionals are once again adopting the PR moniker. The public relations industry is in the [...]
News Analysis
Request a Demo and Pricing
Connect on Social:
Opinion: What we can learn about PR from the Winter Olympics