When creative production company Artichoke wanted to raise the profile of the London’s Burning festival, as part of the commemoration of the 350th anniversary of the Great Fire of London, Flint was brought in to manage a wave of activity across London, including an interactive ‘fire garden’ and a 5.5km ‘Domino run’ run through the City, which culminated with a 120-metre long wooden sculpture of 17th century London set alight on The Thames. 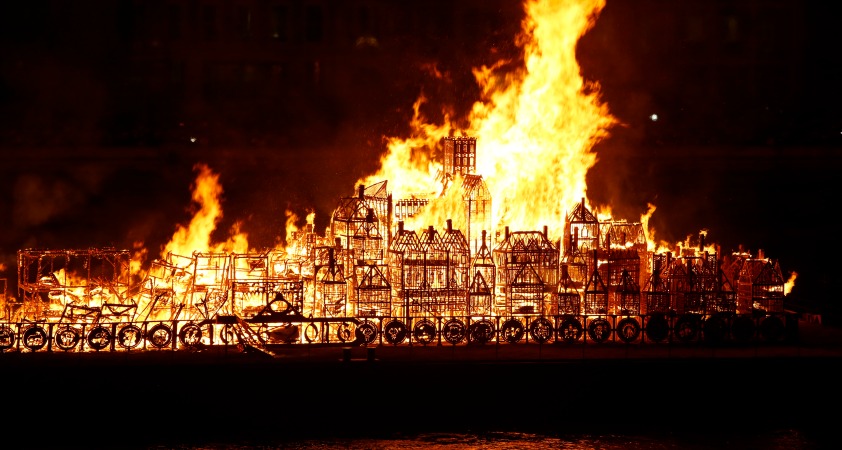 In the summer of 2016, Flint secured a brief from Artichoke, a registered charity and a leading UK creative production company specialising in spectacular large-scale public art initiatives, to manage the promotion of London’s Burning, a week-long festival of contemporary art installations and events taking place across the City, Southbank and Bankside as part of the commemoration of the 350th anniversary of the Great Fire of London (Great Fire 350).

The London’s Burning festival programme was as diverse as it was ambitious, including a 6-hour underwater performance – installation in Broadgate, an interactive ‘fire garden’ created in the grounds of Tate Modern, a kinetic sculpture comprising 26,000 breeze blocks, over 300 volunteers and a 5.5km ‘Domino run’ run through the City, and large scale video projections on the National Theatre and St. Paul’s Cathedral. The festival concluded with the design, construction and symbolic burning of a 120m long wooden representation of London’s 17th century skyline (London 1666) in front of a live audience of 50,000 spectators.

Flint was tasked with engaging multiple, disparate and hard-to-reach audiences with the London’s Burning festival in the context of the Great Fire 350 anniversary. Artichoke required a multi-channel press campaign that would secure local, regional, national and international media interest and, in turn, drive active public participation throughout the week-long festival programme. The campaign needed to articulate the client’s particular creative vision, conveying the enduring influence of a 350-year-old disaster on the contemporary architecture, outlook and infrastructure of the City of London, while also interrogating issues of resurgence and resilience that continue to concern cities across the world today. Further, in the context of the client’s 10 year anniversary, Flint was charged with affirming Artichoke’s world-leading reputation for delivering ‘extraordinary moments that disrupt the everyday’.

The PR brief for the London’s Burning festival posed a number of significant operational challenges, ranging from an uncomfortably tight six-week lead time, a seven-day event programme delivered across multiple venues, over 30 individual stakeholders ranging from the City of London Corporation, London & Partners, Arts Council England and British Land, to the Museum of London, Fuller’s and the London Fire Brigade. the requirement to engage a large number of volunteers around an ambitiously creative public arts programme and the burning of a 120 metre long wooden sculpture in the heart of the UK’s busiest metropolitan centre.

The PR strategy devised and directed by Flint working in close collaboration with Artichoke overcame these many obstacles to deliver a resoundingly successful campaign.

On the Monday morning following the dramatic conclusion to the London’s Burning festival, with the majestic London 1666 sculpture reduced to little more than a pile of smouldering ashes, Flint’s account team woke up to London’s Burning news stories running on front pages the world over, emphatic proof that the campaign had successfully conveyed their client’s vision for the 350th anniversary of the Great Fire of London to a genuinely global audience.

Opinion: Why “PR” is having a renaissance
Brendon Craigie, co-founder and managing partner at Tyto PR, examines why PR professionals are once again adopting the PR moniker. The public relations industry is in the [...]
News Analysis
Request a Demo and Pricing
Connect on Social:
B2B Case Study: GenMobile PR Case Study: Sending Innis & Gunn IPA to India
Scroll to top
Cookie Policy