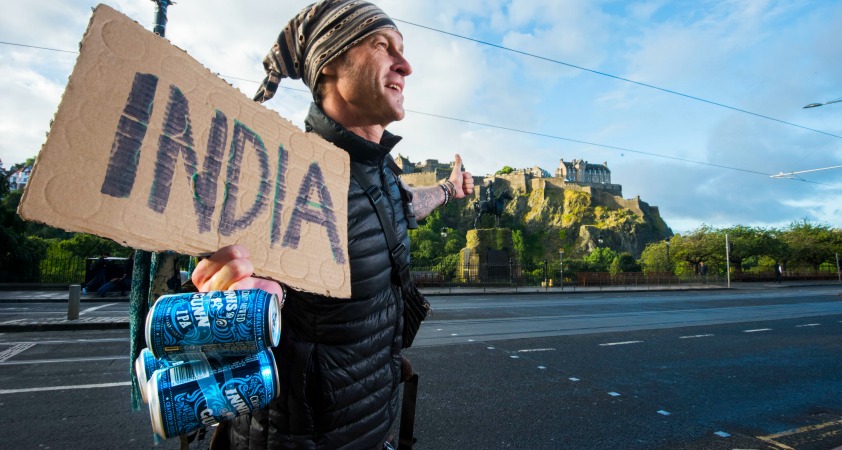 Scottish craft brewer, Innis & Gunn, tasked Manifest with launching its new India Pale Ale (IPA) cans. With IPAs having a recent surge in popularity, Manifest had to do something that would set Innis & Gunn’s new brew aside from the rest in the category, while raising overall awareness of the brand.

The core objectives were simple:

IPAs may have recently come back into popularity but few people (even the craft beer scenesters) know of its rich backstory. The first IPAs date back to the late 1700s when beer was sent from England to the British Empire in the east. This gruelling journey would take six-months at a time, so extra hops were added to the brew to act as a preservative and flavouring, and to ensure the beer survived the journey.

Manifest recognised the opportunity to educate the public about this newly popular beer type, while creating a story that put Innis & Gunn’s own IPA front and centre.

To pay homage to the original IPAs, Manifest enlisted the help of seasoned traveller, Manny Marshall, and tasked him with hitchhiking the 5,000-mile journey from the brewer’s Edinburgh home to New Delhi in India.

With just a backpack full of clothes and a tent, Manny had six-weeks to make the journey. His currency? Cans of Innis & Gunn IPA of course, which were dropped off for her at various pubs and bars across his route for him to trade for food, travel and accommodation throughout his journey.

The trip took Manny across France, Australia, Germany, Czech Republic, Bulgaria and Greece. To avoid the volatile regions in the Middle East, Innis & Gunn flew Mr Marshall from Athens to the coastal city of Mumbai for him to complete the final 900 miles to Delhi.

Manny kept the public updated on his journey via regular updates on the Innis & Gunn blog and social media profiles, using #IPAtoIndia as his hashtag to garner words of encouragement and offers of help from the public.

His journey saw him share a beer with a newlywed couple posing for pictures on Prague’s famous Charles Bridge, drink at the steps of the 2,500-year-old Acropolis in Athens and hitch a ride on a tuk-tuk in Mumbai. Manny’s journey ended yesterday with a final sip of IPA underneath the iconic India Gate in Delhi.

Got a cracking campaign – with impressive results – that you’d like to showcase? If so, email richard.odonnell@gorkana.com.

Opinion: Why “PR” is having a renaissance
Brendon Craigie, co-founder and managing partner at Tyto PR, examines why PR professionals are once again adopting the PR moniker. The public relations industry is in the [...]
News Analysis
Request a Demo and Pricing
Connect on Social:
PR Case Study: London’s Burning PR Case Study: Banning “Fur” from Warhammer
Scroll to top
Cookie Policy