Aside from the fate of the pollsters – who should be looking for new careers after three strikes on the bounce on calling the big things wrong – one assured outcome from the Trump victory will be the microanalysis of how the hell he did it, says Richard Medley, head of corporate at Frank PR. 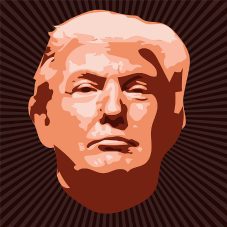 “This is a man who is consistent, who speaks in plain English”

The fool, the braggart, the foot in mouth king, and the next president. Universal W. T. F.

But parking the emotional side of perhaps the most emotional vote ever, and trying to look beyond the message appeal that bordered on the fanatical, there is of course a communications mentality here behind his victory – as there was in terms of smart channel use when Obama first mobilised social media like never before eight years.

This was a toxic brand that won (albeit against another toxic brand) so what did the swing vote go for in the mix? It wasn’t all policy, and wasn’t all politics – or else the polls may have been right rather than wrong.

I would venture it’s brand transparency.

This is a man who is consistent, who speaks in plain English, who understands what his audience wants to hear and who would say the same thing  – heart on sleeve – to whichever sub group he was talking to. Clinton would tailor words to audiences, and when that was reported, she looked manipulative. Corporate. Not genuine. She missed the fact there are no walls in communications and that silo messaging is in the past.

And when there is genuine lack of trust on either side of the fence in a world that feels broken from street level up, people will go for the voice that is genuine and real, not over manipulated or crafted. And in Trump’s words, in a ‘bigly’ way. Messages are not unimportant, but are they not the only consideration.

And that’s the same scenario for brands, exemplified by the muffled sounds and defensiveness of BHS, Sports Direct and other well-documented corporate headline grabbers.

When you start from a position of people mistrusting you (Reality TM), you have to work extra hard to curry favour. Language, willingness to engage, big picture values clear and to the fore, and a willingness to disrupt in how those thoughts are communicated are all important. How many corporate brands would take the Trump approach and pick up the phone to media to engage in a debate one on one on something important to them?

This is positive unpredictability. It’s not part of the establishment. And clearly people liked it.

So there is the corporate brand challenge. And if you don’t like the sound of that, then think back to Brexit. The last UK election. The mentality of Arab Spring. The establishment isn’t working, and people are actively challenging those who stay fixed in that spotlight.

Is your business heart ready to reinvent, to follow the audience shift, embrace transparency as the mantra and build a corporate brand that isn’t afraid to be less… corporate?

And if and when bad stuff comes your way, you’ll have credit in the bank as an open communicator with those who raise the big questions. Not every audience is so split as on ‘The Donald’/Hilary level, but whenever disgruntlement is in play, transparency will be a key factor in diffusing it and winning over (or back) some hearts and minds.

We’ve always championed the positive disruptive spirit at Frank, as much in the corporate ‘Francis’ side of things as in the consumer space. So let’s not build walls or hide behind emails and lets do something disruptive and head turning for the better.

For more on the PR lessons of Trump’s campaign and victory, read …

Did Trump create the perfect PR campaign?
Back in July, Lord Sugar’s former publicist, David Fraser, said Trump’s campaign for the US presidency was arguably one of the greatest PR campaigns in recent years. Fraser, who is now MD of PR and SEO agency Ready10, said that when it came to communications, Trump’s campaign was “poetry in motion”. What do you think?

The US Election and when influencers don’t influence
Nina Sawetz, head of editorial at Bottle, on why celebrity endorsements didn’t create a landslide win for presidential candidate Hillary Clinton and the new era of ‘audience voice’ that looks past a recognised elite.

Opinion: Why “PR” is having a renaissance
Brendon Craigie, co-founder and managing partner at Tyto PR, examines why PR professionals are once again adopting the PR moniker. The public relations industry is in the [...]
News Analysis
Request a Demo and Pricing
Connect on Social:
Porter Novelli makes multiple hires to health and wellness team Sky Arts hires Margaret
Scroll to top
Cookie Policy