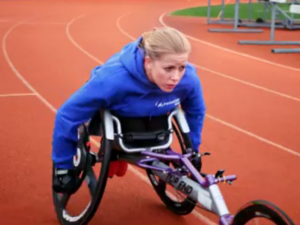 Inspired by clients who have been through life-changing injuries, Irwin Mitchell and Instinctif Partners launched a campaign to highlight the crucial role that sport can play in a person’s recovery and rehabilitation.

Objectives
The objective of #DontQuitDoIt was to inspire and engage audiences by sharing stories that raise awareness of disability in sports, as well as the Irwin Mitchell brand.

Irwin Mitchell, a UK law firm, works with people who have suffered life-changing injuries; not just in the courts, but by providing support throughout recovery, rehabilitation and the pursuit of the best possible quality of life. Through #DontQuitDoIt, Irwin Mitchell was able to show how important sport can be to the recovery process.

Strategy
The campaign was fully integrated and involved live events, films, social media, PR and advertising. Instinctif Partners produced a series of campaign films with very high production values; reminiscent of sports advertising. The films were filmed on gyroscopic RED cameras at a 5K resolution to capture strong images with lots of movement, and they went through an extensive post-production process including meticulous sound design to create texture, vibrancy and authenticity. Released on YouTube, the films were promoted across multiple social media channels, and still images from them were used as the basis for newspaper advertising.

Content changed throughout the campaign. In 2015, the films focused on the real life stories of individual Irwin Mitchell clients who had got involved in disability sports. Into 2016, the campaign content has evolved to focus on teams and Paralympic athletes, including an amputee football team who went head-to-head with former England footballer John Barnes in a skills contest.

The #DontQuitDoIt campaign also connected with cultural themes and trends, the release of the latest film about Gold medal-winning Paralympic athlete, Hannah Cockroft MBE (see below) was released to coincide with the Olympic and Paralympic games.

Results
#DontQuitDoIt is a high-profile personal injury campaign for Irwin Mitchell, which is having a positive impact both in terms of promoting the work the firm does and in raising the profile of disability sports.

Since campaign launch, the campaign has achieved:

Mike Macfarlane, managing partner at Instinctif Partners, said: “We wanted this campaign to feel authentic. Rather than just talking about what it can do, Irwin Mitchell is inspiring and engaging audiences by sharing compelling stories that have a cinematic look and feel. Not only is that yielding tangible ROI for its business, but in terms of the corporate profile, it also places Irwin Mitchell among the most dynamic in the legal services sector.”