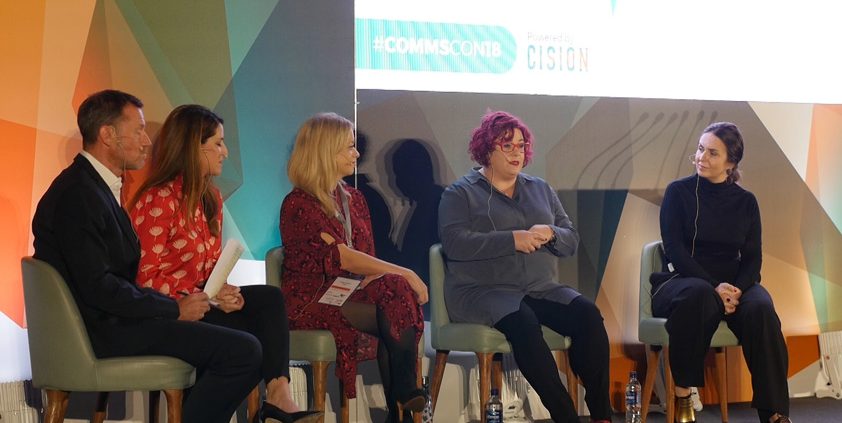 Creative storytelling was the order of the day at CommsCon, as a quartet of fabulous female storytellers shared their thoughts on how to develop engaging narratives in the day’s opening panel discussion.

The panellists started the session by presenting their favourite pieces of storytelling from the past year, before going onto explore the best techniques to create great integrated stories.

Creativity is about solving problems

Lungu, who has a background which encompasses both paid and owned media, nominated the Bihor not Dior activation has her favourite story. The campaign was designed to raise awareness of how big fashion houses often use local cultures as design inspiration, but that these cultures receive nothing in return.

She made the point that the campaign demonstrated how creativity and original thinking can both solve problems and raise awareness of issues in an engaging way.

“Creativity is about solving existing problems in a new way, and we need to be obsessive about originality,” she noted.

However, Lungu also emphasised the importance of aligning data to creativity: “Our job is bringing together the right bits of data and insights, and mixing them together to create beautiful stories. And then improving those stories based on the data coming in.”

Bring emotion to your campaign

Plowman used the #HSBCNavigator campaign to demonstrate that great storytelling isn’t restricted to those working in consumer PR. She described how the campaign’s message is designed to “empower internal audiences to have better conversations with customers.”

She argued that rather than coming up with a great tale, storytellers should base what they create on what they want their target audience to do after seeing the campaign.

“Good storytelling means starting with a clear measurable outcome that you want from the target audience – otherwise you’re just floating things out in the sky,” she said.

With regards to making a story engaging, Plowman added that all good stories bring an emotional element to their audience: “There is no good story without a good plot, a bit of drama. Don’t make your story too vanilla.”

Bennett highlighted Virgin Holidays’ LGBTQ+ campaign, which imagined what it would be like if  a straight couple received the same type of treatment on holiday as gay couples sometimes do.

She said that when Virgin looked to tell stories, it focused on business outcomes and changing perceptions, rather than creating “PR for PR’s sake”.

Similarly, Bennett noted that storytelling should be focused on exactly that; telling the story, rather than looking to gain maximum exposure by going viral. “It’s always about the story and not the channel,” she said.

She also praised charities for the way they tell stories to earn donations, stating that some of the best and most innovative storytelling comes from the sector.

Finally, Bergl showcased one of Adobe’s most successful B2C campaigns; a digital recreation of the artist Edvard Munch’s 100-year-old brushes, which were made into perfect digital replicas for Adobe Photoshop CC.

She highlighted that one of the reasons why the campaign was so successful was because of its authenticity. “We truly embraced the power of storytelling by unlocking an age-old mystery for the sake of innovation. We tapped into Adobe’s creative heritage and unlocked tools for our creative community, all the while surrounding the story with Adobe’s innovation and magic. This is authentic to who we are as a brand.”

Bergl also added that she thinks herself lucky to be able to partner with PR, marketing and branding agencies who are loyal customers of the Adobe Creative Cloud and that she “gets a kick out of ” working closely with natural brand advocates.

Opinion: Why “PR” is having a renaissance
Brendon Craigie, co-founder and managing partner at Tyto PR, examines why PR professionals are once again adopting the PR moniker. The public relations industry is in the [...]
News Analysis
Request a Demo and Pricing
Connect on Social:
Sir Craig Oliver: “Tell your own story, or it will be told for you...