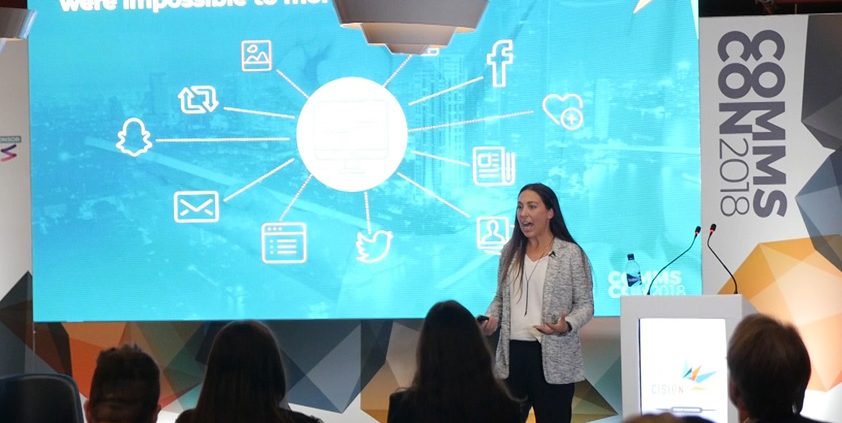 The Cision Innovation Lab is developing technology to fuel the future of PR and comms, Cision’s, David Barker, president of data solutions and innovation, and Kaila Garrison, VP of marketing strategy and operations, revealed in a special session at CommsCon.

Cision’s Innovation Lab, located in both Berlin and New York, will look to incorporate the best comms technology into the company’s offering, whether by integrating it into the Cision Communications Cloud® or through its Cision Insights offering.

The pair discussed the types of technology the lab seeks to develop, how it is building the most advanced earned media technology through development, partnerships and acquisitions, and how its operations align with the principles of Earned Media Management and its four tenets.

Deciding what to develop

The lab will act as Cision’s research centre, serving as a testing ground for integration of acquired technology into the Cision Communications Cloud™, as well as the integration of the Comms Cloud™ with industry-leading marketing and advertising technology.

When deciding which technology to develop, acquire or partner with, Barker is able to identify the areas where comms professionals are lacking suitable tools to do their work.

“We look at the comms professional and we look at the gaps he or she may have in their workflow,” he said. “We think about ways to solve the problems PRs have in the same manner that paid media and other marketing disciplines did a long time ago.”

The Innovation Lab will use the power of technology to build on the principles of Earned Media Management, which sees earned media adopt the standardised processes and use of technology and measurement used in paid and owned sectors.

How the Innovation Lab innovates

Barker and Garrison used the session to unveil some of the existing technology which has been perfected in the lab and the areas in which the lab will look to innovate.

They highlighted a number of new innovations in the Innovation Lab pipeline, including new advances in tracking earned media audience data and developing an Influencer Graph which reverses the traditional media relations model by mapping audiences to influencers.

One new development which is already being rolled out is the use of image recognition technology. Both Garrison and Barker discussed the reasons behind the acquisition of ShareIQ and its integration into the Comms Cloud™ as Cision ImageIQ.

Cision ImageIQ allows communicators to monitor images in the same way they monitor text, meaning that they no longer need to depend on alt tags or hashtags when tracking how their images have been used across Instagram, for example.

The pair noted that they expect this technology to change the way comms professionals strategically use images as a part of their campaigns, a key component of all technology being developed in the lab.

The four centres of testing

The technology developed in the Innovation Lab will fall under one of the four primary testing centres which make up the department. This is split under Quants, Artificial Intelligence, Graph and Media.

The Graph stream is dedicated to working on the Influencer Graph, as well as technology which allows communicators to visualise and act on the interconnectivity of key influencers, content and target audiences.

Quants covers a range of innovations which will enable comms professionals to access data, metrics and measurement to validate the importance of earned media as a business driver.

Finally, the Innovation Lab’s Media wing will research how Cision’s products can integrate with platforms in the broader martech environment to extend and connect earned media to paid and owned channels. This is where many of the partnership aspects of the lab will take place.

Over the coming months, each of these four sectors will look to produce new innovations which add to the Cision Comms Cloud™ and Cision Insights. Garrison summed up how each of the areas will work to produce these innovations:

“We’re working 12-18 months ahead of what comms professionals think they want. David’s job is to come up with things communicators don’t even know what they want yet, but they’re going to need them and going to want them.”

Opinion: Why “PR” is having a renaissance
Brendon Craigie, co-founder and managing partner at Tyto PR, examines why PR professionals are once again adopting the PR moniker. The public relations industry is in the [...]
News Analysis
Request a Demo and Pricing
Connect on Social:
Daily Mirror’s Nada Farhoud: The relationship is the most important thing