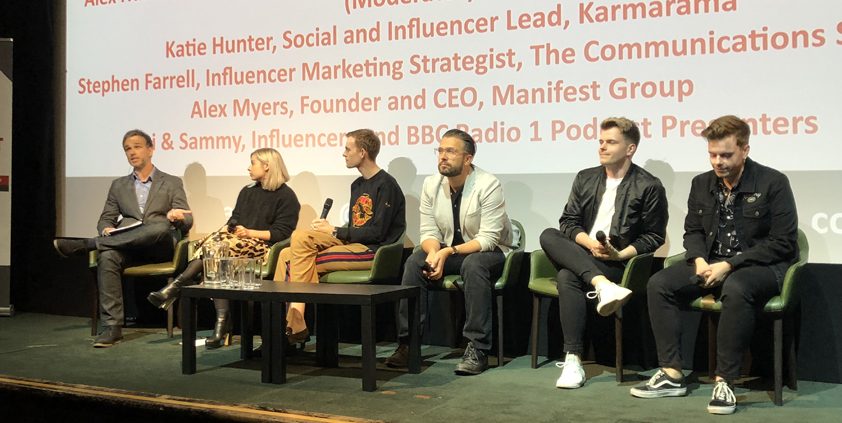 Influencer marketing in the UK is still transient and has not yet matured to the point where influencers and brands have long-term relationships, Radio One podcasters Niki and Sammy revealed at a Cision-sponsored PRWeek breakfast briefing.

In a panel discussion hosted by Cision’s head of sales and relation management – agency, Alex Hunter, the pair outlined how brands and agencies in the UK were still looking to adopt influencers for individual campaigns, rather than building something for the longer term.

They said: “The view often taken by brands is ‘get lots of bang for your buck and then get out’. There is always this view of ‘here’s your fee for now, it would be great to work with you in the future’, but that never happens. As the area matures we may see some long-term partnerships, but currently we don’t see many outside of the beauty sector in the UK.”

The pair were joined on stage in the panel discussion by Manifest Group founder and CEO Alex Myers, Karmarama social and influencer lead Katie Hunter and Stephen Farrell, influencer marketing strategist at The Communications Store. The group analysed topics from determining the right influencer to use, to how to work across social platforms and the future of influencer marketing.

In response to Niki and Sammy’s point about not being asked to work with brands consistently, the panel agreed that influencer marketing needs to move in a direction of brands using influencers as long-term brand advocates.

“I think there definitely will be a shift to longer term partnerships as we just have to look towards advocacy rather than short term relationships,” said Katie Hunter.

“In a good collaboration, the post is just the beginning, it will build momentum,” Farrell added. “Getting momentum for your brand and increasing its visibility creates extreme impact.”

“Brands need to look past paying to post. That doesn’t mean you don’t get involved in paid activity but you do what the influencer would normally do. The idea of ‘here’s £1,000, post this online’ is irresponsible.”

Niki and Sammy also elaborated on what it is like for influencers to work across ever-changing social platforms and the difficulty of adapting content to keep up with the changes. “We feel like a lot of these platforms are really reaching to do everything,” the pair noted.

By describing the way the likes of Facebook and YouTube are changing, as well as new developments like IGTV, Niki and Sammy warned that the constant change to funding models and the way content is promoted on the channels could drive influencers to other platforms:

“For us as content creators, we’ve realised that there is no allegiance from the platforms we’re on – they won’t protect us, so we’re always looking for other platforms out there and always keeping an eye on what’s happening next.”

The panel also considered how brands should go about identifying the right influencers to represent them. Farrell recounted numerous client meetings where brands had wanted to use influencers who had the most followers, rather than who was most relevant.

“I think that number of followers has been the currency of this industry for too long,” he said. “We just need to be far more intelligent and thoughtful about what we are doing, as that will have an impact on our ROI. We have to think meaningful rather than mass.”

Niki and Sammy recalled that the first brand partnership opportunity they were offered was to promote a screwdriver, which they turned down as it was not even close to anything which would interest their audience.

The panellists agreed that brand affinity is hugely important when choosing the right advocate. Myers made the point that the right brand representative doesn’t have to be someone who would be considered an “influencer”.

He said: “If they’re a fan of your brand then that is the catalyst you need to have a meaningful relationship with them. It is far easier to find a fan and make them famous than find someone famous and make them a fan.”

To find out more about how to get the most from influencer marketing, download our white paper on the subject by filling in the form below.

Opinion: Why “PR” is having a renaissance
Brendon Craigie, co-founder and managing partner at Tyto PR, examines why PR professionals are once again adopting the PR moniker. The public relations industry is in the [...]
News Analysis
Request a Demo and Pricing
Connect on Social:
The Hook: Our original content separates us from other social publishers