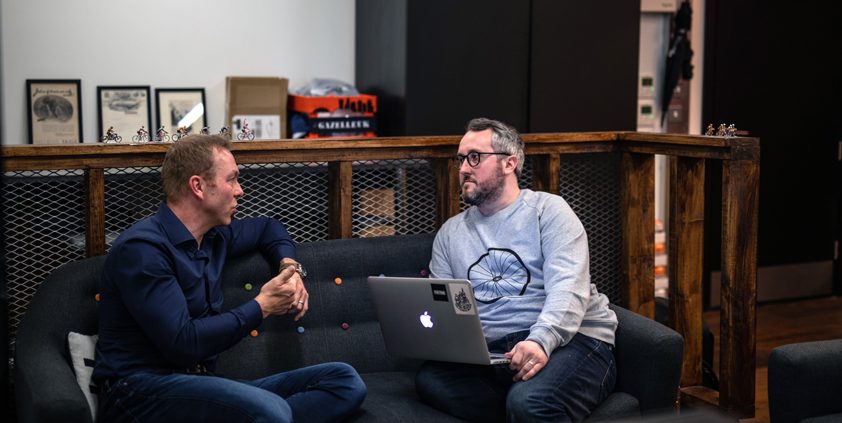 Adam Tranter, founder of Fusion Media, reveals how he transitioned from being a racing cyclist to an agency founder, why Fusion focuses on endurance sports and what the future holds for cycling.

How did you end up transitioning from a racing cyclist to a PR agency founder?

Completely by accident. I wish the answer was more profound than that, but it’s not.

I’ve been cycling most of my life, and after realising I wasn’t going to make a career from racing a bike, and also being aware that I could end up with almost no demonstrable skills, I started writing about cycling – the topic I knew most about – instead. That coincided with the start of Britain’s newfound obsession with all things bike – helped hugely by a large cycling medal haul at the Beijing Olympics.

We’ve been fortunate that almost each year since there has been something that keeps cycling in the national consciousness; whether it’s Boris bikes, a couple of British blokes winning the Tour de France, the London Olympics, the Tour de France in Yorkshire, and so on. What started as a fairly niche passion has transformed into a scalable business.

Why have Fusion Media focus on endurance sports?

Cycling is just one part of what Fusion Media does. We think there’s something in the DNA of someone interested in endurance. Whether that is cycling, running, triathlon, walking – generally enjoying outdoor pursuits – we find there’s a huge crossover in how they behave and the media they absorb.

We focused on a specialism in endurance sport. People like passion and subject matter expertise. We’ve seen a huge focus in agencyland towards niche; the knowledge and passion we used to take for granted has now become hugely desirable for brands looking to reach a sizeable group of very passionate people.

What are the benefits of focusing solely on one niche area of PR?

The great philosopher Michael Gove MP said that Britain has had enough of experts, and I thoroughly hope that he is wrong. We live in a culture where consumers get their information, almost instantly, from a variety of sources.

But they’re still not making instantaneous decisions; research we’ve done in cycling suggests that the average consumer is taking six months over a bike purchase. The key for us is to have unrivaled expertise of the endurance market and knowing how, as an agency, we can have a significant commercial impact in the decision making process.

And, ultimately, we believe brands want and deserve better. If your customers are spending many hours being well-informed, you want your PR agency to, at the very least, have the same attention on the sector. When you’re dealing with passionate people, technical products and aspirational brands, genuine knowledge and understanding is very important.

How important is the digital aspect of what you do at Fusion Media?

It’s massive for us. As I mentioned, customers are incredibly well-researched and the techniques our agency uses needs to match where they’re getting that information. We’ve seen SEO agencies move into the PR space with some success, but there’s no-one better at selling stories and getting placements than a good old-fashioned PR agency.

So we made a very conscious decision to get ahead, use our PR expertise, but develop the agency into offering services around SEO, content, community management and paid social. It is now so much more than the coverage.

What are the next big things to happen in cycling?

I think there is a huge need to improve gender parity in cycling. I saw some data recently which suggested that cycling in the UK, in terms of gender participation split, is at present where running races in the US were in 1996. Today, more women than men partake in running, and it shows the huge potential for cycling.

It will take disruptive brands to invest and grow the sector, but we’re starting from a good base as women’s cycling is already some of the most exciting to watch.

We’re working with OVO Energy, sponsors of the Women’s Tour race, and this year announced at parliament their funding for equal prize money for women versus the men’s Tour of Britain. It was a proud moment for us as an agency but really just the start of a long list of things that need to happen soon to realise the potential of women’s cycling.

Opinion: Why “PR” is having a renaissance
Brendon Craigie, co-founder and managing partner at Tyto PR, examines why PR professionals are once again adopting the PR moniker. The public relations industry is in the [...]
News Analysis
Request a Demo and Pricing
Connect on Social:
60 Seconds with RunRagged’s Simon Addy