For a pro bono campaign project, Frame PR capitalised on a visit that George Clooney made to a shop run by, and for, homeless people. The visit resulted in a 20% increase in sales and an upturn in donations that would provide homeless people with free meals on Christmas Day and for the rest of 2016. 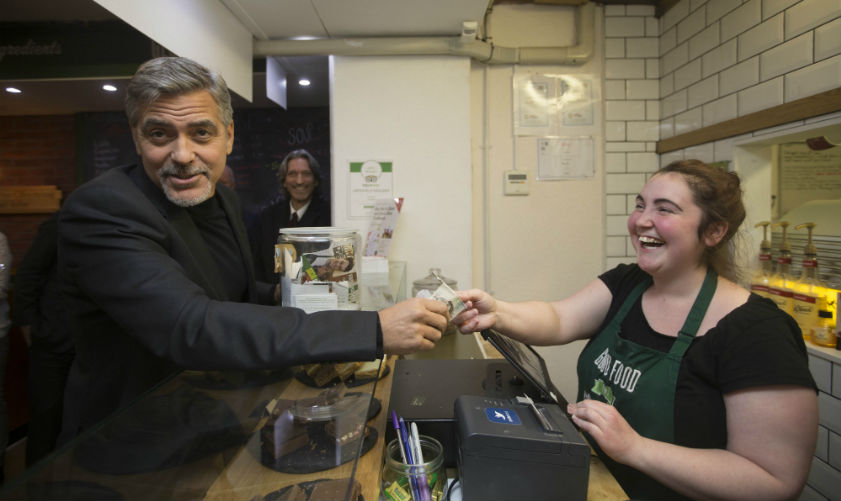 Frame PR offered its services free of charge to Social Bite, a sandwich shop that trains, employs and feeds homeless people. Social Bite had already won the loyalty of thousands of happy customers since it opened in 2014, and its Christmas campaign, with Scottish deals and events site itison, sold more than 30,000 £5 meal vouchers.

Frame PR wanted to help with the remit to better tell Social Bite’s story, and help even more people as a result.

Hollywood star George Clooney accepted an offer to visit Social Bite in Edinburgh on 12 November, 2015. It was now Frame’s job to ensure that the star’s visit would have a lasting and tangible benefit to Social Bite, and that its story would come-through in a meaningful way amid the Clooney hype.

For Social Bite to reap the benefits of Clooney’s visit, Frame would have to overcome some pretty big challenges. The team had to beat all the other Clooney stories that came out that day, with zero budget, no formal media arrangements and only 15 minutes of Clooney’s time.

The first thing to get right was the story, and as one of many released that day, Social Bite’s had to be stronger than the rest. Clooney pre-paying lunch for local homeless people would be the hook, requiring him to agree to this during his short visit. Frame would then issue the release straight after to a host of major UK and global media outlets.

Next, what was needed was a great picture. It not only had to capture the story, but also beat the competition from the paparazzi. Clooney taking a selfie with Social Bite staff would be the money shot. The pictures would be distributed far and wide, free of charge.

Lastly, a video was needed that would spread like social media wildfire, but would still be good enough to feature on major TV news networks. Frame enlisted the help of a camera crew from a local college to capture the visit, and the footage was fed into a Sky News truck outside the sandwich shop, before being distributed to the world’s major news networks.

Ensuring Clooney’s visit lasted beyond the big day, Frame PR held something back. A short, 15-second video, shot on an iPhone, saw Clooney pledging five pounds to the 2015 itison Christmas campaign. This footage would be used to develop Social Bite’s 2015 Christmas campaign, and was distributed in the weeks leading up to Christmas. 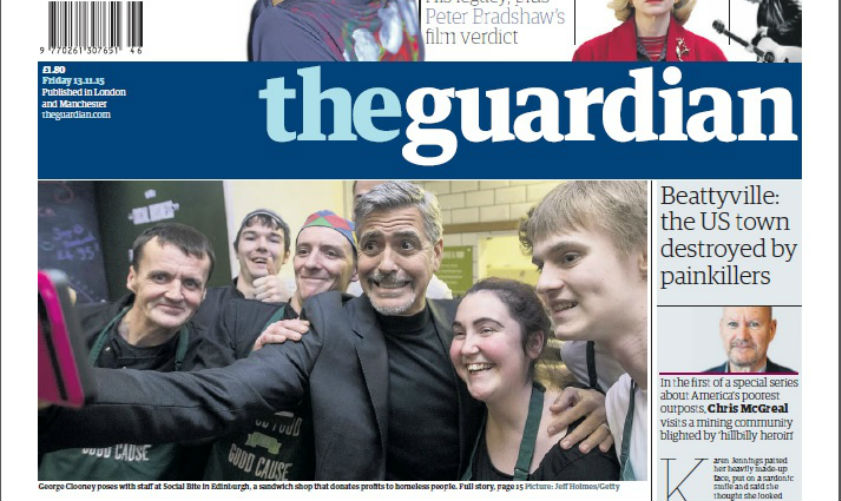 Coverage on the front page of The Guardian

Before he even stepped foot in the door, Clooney’s impending visit to Social Bite was featured on Sky News, ITV and BBC breakfast, broadcasting to a TV audience of over 1.5m.

The story ran in more than 900 media outlets, reaching over 40 countries including Russia, China and Thailand. Online influencers such as BuzzFeed and MailOnline ran the news as their top story and Social Bite trended on both Twitter and Facebook for the first time.

In December, the Christmas campaign was covered in more than 200 publications across 15 countries, 18 UK newspapers with a combined readership of eight million covered the launch and Frame’s pre-recorded video footage received over 760k Facebook views.

Most importantly, Social Bite’s food and drink sales increased 20% after George Clooney’s 15-minute visit. The 2015 Christmas appeal had exceeded the number of donations made in the previous year within 36 hours, and 73,000 donations were made in just over two weeks, raising £365,000.

The money raised was enough to feed the homeless at all five Social Bite shops on Christmas Day, and provide free meals to the homeless for the rest of 2016. There was even enough to fill a convoy of vans which left for Calais, Serbia and Lesvos on Boxing Day, providing food for those who needed it most.

Got a cracking campaign with impressive results that you’d like to showcase? If so, please email emily.andrews@gorkana.com.