Changes in communications and diversity in the PR industry were two major themes to come out of the PRCA National Conference 2016 held at BAFTA, London last week (23 September). 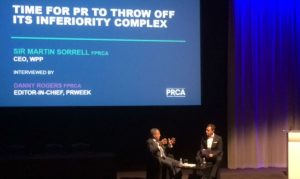 Ex-BBC world affairs correspondent and international affairs editor for ITV, Rageh Omaar, reflected on his career, and noted the changes that have taken place within the journalism profession. He acknowledged the role that social media has played in the instant capture and distribution of news, citing the Arab Spring as an example.

He said: “News isn’t just for one channel anymore. It could end up anywhere.”

Given the nature of digital and social sharing, the potential audience for any given piece of content is potentially huge, he remarked. For brands, the outcome of this can be both positive and negative.

As advice for PR professionals dealing with a crisis communications situation, Omaar advised that the company spokesperson is key and has to be carefully chosen. “The person who has cut-through might not be the CEO,” he said.

Citing Ketchum’s own research, Cartwright said that, in addition to an increase in women taking up leadership roles, future male leaders will also adopt what is, traditionally, a more “feminine” approach to leadership.

Radio presenter Nick Ferrari, who livened up the audience with celebrity stories and funny anecdotes, stirred up controversy on Twitter by addressing a majority female audience with the phrase, “What you blokes do.” The generalisation served as a reminder that the PR industry is still working on its diversity credentials.

Good start from Nick Ferrari addressing a 60% female audience: "what you blokes do" #prca2016

Group MD at Newgate Communications, Steffan Williams, chaired the conference, which began with an introduction from PRCA director general, Francis Ingham, who outlined the growth of the public relations association, as well as its ambitions for the coming year.

Other speakers on the day included Sir Martin Sorrell, CEO at WPP, and Baroness Nicholson, UK trade envoy to Iraq.

Opinion: We must save the internet from the EU’s copyright plan
PR professionals must act now to save the internet from the EU’s copyright directive, says Nicholas Dunn-McAfee, the PRCA’s head of public affairs, policy and [...]
News Analysis
Request a Demo and Pricing
Connect on Social:
Brian MacLaurin and Anna Hodgekiss join Iredale Communications Measurement Month: Sign up for final few places at PR panel event
Scroll to top
Cookie Policy