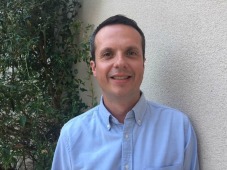 Baine spent more than 20 years at the BBC as a senior journalist and editor. During his career, he has worked on a range of BBC programmes, including BBC World News TV, BBC Radio 1 Newsbeat, BBC Radio 5 Live, BBC Radio 4 and BBC Radio Leicester.

In his new role at Good Broadcast, Baine will help create campaigns to deliver top tier broadcast coverage as part of integrated PR and content work.

He will also play a key role in content production and media training, and report to Phil Caplin, who joined Good Relations in February (2016) to launch and lead Good Broadcast.

Baine told Gorkana: “Moving to Good Broadcast after more than 20 years at the BBC is a great opportunity to use my journalistic skills in the PR world. It’s going to be fascinating to be on the consultancy side rather than being on the receiving end of emails and calls from PRs.

Caplin added: “It’s been an unbelievable first year at Good Broadcast and we are excited that we are growing so fast. Clients are increasingly coming to us for integrated campaigns with broadcast and content at the centre. Jack is a hugely talented broadcast professional with years of valuable experience under his belt.”

Opinion: Why “PR” is having a renaissance
Brendon Craigie, co-founder and managing partner at Tyto PR, examines why PR professionals are once again adopting the PR moniker. The public relations industry is in the [...]
News Analysis
Request a Demo and Pricing
Connect on Social:
NBCUniversal International names CMO Andrew Martin International hires Pure PR
Scroll to top
Cookie Policy