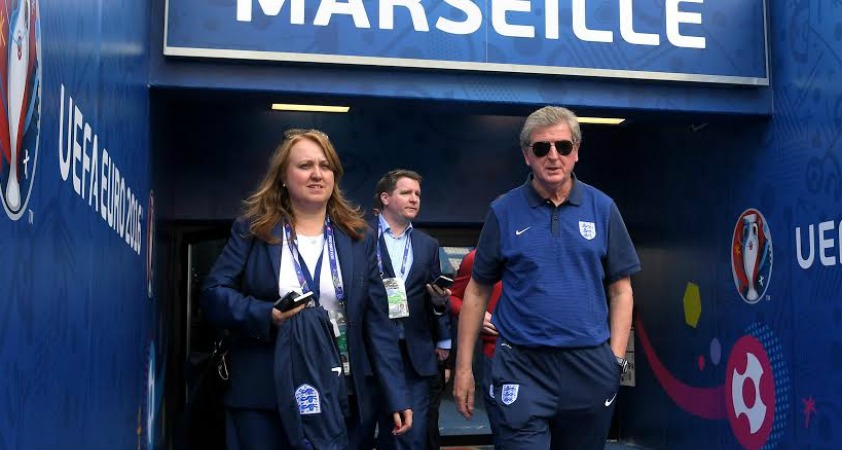 Joanne Budd, pictured with England manager Roy Hodgson (far right) on the eve of the EURO 2016 Group B match between England and Russia at Stade Velodrome on 10 June 2016

Budd is currently head of media operations at The Football Association, where she has worked on the organisation’s public-facing comms activity for more than two decades.

She joins Crystal Palace in August ahead of the new Premier League season, and after this summer’s European Championships in France, where she is currently managing media operations for Roy Hodgson and the England squad.

During her career at The Football Association, Joanne has managed media and PR activity around the England senior men’s team for the last ten World Cups and European Championships, the re-opening of Wembley Stadium, UEFA Champions League Finals and the FA’s 150th anniversary.

Steve Parish, Crystal Palace chairman, said: “Joanne has a wealth of experience at the top level of the game and she will be a tremendous addition to the team.”

This appointment is a return to the club for Budd, who worked for six years under previous managers Steve Coppell and Alan Smith in the late 1980s and early 1990s when the team was promoted to the top-flight, appeared in an FA Cup Final at Wembley and won the Zenith Data Systems Cup.

Budd said: “I am really looking forward to returning to Palace and the opportunity of working in the Premier League. I’m sure there are going to be some great times ahead for the club.”

Opinion: Why “PR” is having a renaissance
Brendon Craigie, co-founder and managing partner at Tyto PR, examines why PR professionals are once again adopting the PR moniker. The public relations industry is in the [...]
News Analysis
Request a Demo and Pricing
Connect on Social:
The Brandman Agency adds La Mamounia to UK portfolio Citypress names social media lead
Scroll to top
Cookie Policy