Diane Scott, director of media and corporate affairs at Visa Europe, discusses how she convinced a new CEO that her comms team was a valuable asset to the business, during the AMEC summit 2016.

In June 2014, Scott had just joined Visa in her current director role. Speaking at the summit, she described how it was important to impress her new senior management, and how she was faced with the big questions from her CEO. She recalls how questions at the time included, “How do I know anything you’re doing is getting a share of voice (in the industry)?” and “How do we know this coverage is doing anything for our business?”.

Here are three steps that Scott took to make the most of her budget:

Scott said that her first line of action included working out what key messages the business wanted to project, and how much coverage came down to the work of her teams.

She said that the first step was to find a reliable media partner, in this case Gorkana, and work on getting the message right – which took three or four months of discussions and testing. She added: “It takes a long time to work out what the key message is. It took a few months to get it absolutely right.”

The second step for Scott involved getting various comms teams and agencies also working within the business to report all of their actions, and report this back to Gorkana to identify how much was being projected by the Visa teams.

Create a framework for a decentralised team

Getting all agency partners and teams reporting back to the main office was a core step to success, according to Scott. She now provides all teams with an international report and framework. She added: “This can promote a sense of competition and help identify problems for specific teams.”

Scott recommends to take time and pay attention to background information for best results. As an example, she found that; while in traditional media outlets Visa’s ‘share of voice’ was large compared to competitors, this was significantly lower in social outlets. This is now an oversight that she would like to review within the company, and ensure that key message delivery is clear throughout media outlets.

In 2015, Scott’s team was awarded the second highest performance rating within the business. She said: “That means you’re up against business units who turn profits and are revenue generating. For a support team to get the second highest rating, I think that’s phenomenal and nothing close to what we were achieving before.

“[Measurement] gave us the ability to have a different sort of conversation and it positioned us as people who were business savvy.” 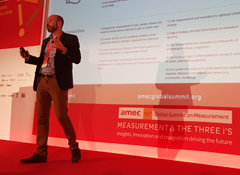 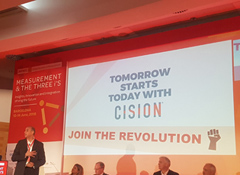 AMEC summit showcases the future of PR measurement
Industry leaders showcased the innovations set to revolutionise PR measurement at the 10th AMEC Global Summit in Barcelona this week. This annual summit has provided many of [...]
News Analysis
Request a Demo and Pricing
Connect on Social:
James Herring: How to perfect the PR stunt Gorkana meets… DadblogUK
Scroll to top
Cookie Policy