When individuals have more influence than the organisations they represent

Following her well received speech at the Golden Globes, there was widespread speculation that Oprah Winfrey may run as a Democrat candidate in the 2020 US presidential election. The rationale is that we are living in an age where having a personal brand is important. The Republicans, had been pulled along in the slipstream of the celebrity bandwagon of reality TV star Donald Trump.

The Cambridge political scientist David Runciman suggested last week on the excellent Talking Politics podcast, that “Donald Trump is the most famous human being in history – it’s true, he is literally bigger than Jesus”. In a world where fame has become a significant lever of power, it follows that the Democrats need a celebrity with wide name recognition of their own.

This highlights a shifting dynamic as individuals increasingly have more influence and power than the organisations they represent. As Michael Wolf claims in his White House expose Fire and Fury, the motivations and priorities between the President, Republican establishment and government ‘deep state’ are often not aligned. The resulting tension is not hidden behind the curtain but out in the open and amplified as all sides use different media channels to put their point of view, from White House press leaks to the infamous 4am tweets.

Social media allows individuals to communicate directly without needing to use official channels of their affiliated organisations. The BBC has found itself in the middle of a pay discrimination scandal following the resignation of China Editor, Carrie Gracie who claimed that she was not being paid the same as her male foreign editor counterparts. The impact was stronger because Carrie used her own blog to publish her resignation, addressed to BBC licence fee payers. This open letter was picked up and linked to on mainstream news sites leading to many women in prominent roles both in the BBC and broader media industry to openly support Carrie’s stance via Twitter, many using the #IStandWithCarrie hashtag.

Many journalists have become brands in their own right that can operate beyond of the bounds of their parent organisation. Robert Peston, who made his name during the financial crisis was able to move from BBC Economics Editor to ITV Political Editor, transferring his following and profile from one organisation to the other.

Meanwhile, Nick Robinson, the BBC Political Editor, was able to change roles to the Radio 4 Today Programme while maintaining his profile and style. Over Christmas, I listened to podcasts where both journalists, whose day job is to interview high profile people, had the tables turned on them and were interviewed as if they were the famous ones. The fact that Nick Robinson’s interviewer was ex Chancellor of the Exchequer and current Editor of the Evening Standard, George Osborne, suggested that increasingly, they are! George Osborne, of course, is another example of a personal brand transcending organisation and role.

I have seen this dynamic between personal and individual brand at play with our own clients. Academic and professional services clients often have a complex relationship between the organisation and people that represent the organisation publicly.

Often the best and most credible spokespeople are not the heads of the organisation but those that have built specialist knowledge in their own area. Professors and Research Fellows rather than Vice Chancellors in universities. Practice Heads and subject matter ‘thought leaders’ rather than CEOs in management consultancies.  But these people have their own profile and priorities that are not always perfectly aligned with those of their organisation.

Data from the Edelman trust barometer suggests that employees and technical experts, are more trusted than bosses. At the most recent AMEC Global Measurement Summit in Bangkok, Rachana Panda, Chief Communications Officer for CE in South Asia explained how they are empowering their 300+ employees to use social media to act as brand ambassadors. 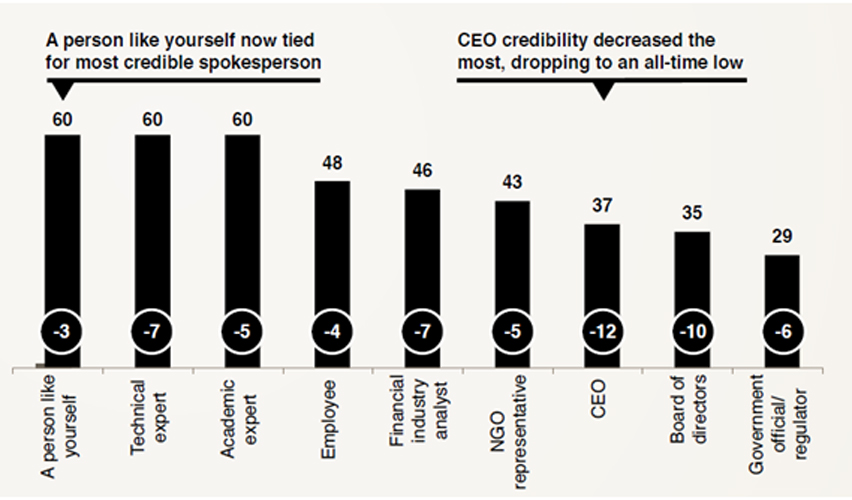 This can help us to both build reputation and to defend it when it comes under attack. We helped Samsung UK during the Note 7 crisis – when the company’s flagship new ‘phablet’ had to be eventually recalled following a number of publicised incidents of the device’s battery overheating.

To quote BBC technology editor Rory Cellan Jones: “As brand-damaging, consumer alienating PR disasters go, Samsung’s issue with its latest phone takes some beating. When passengers on aircraft are being told to turn off their Samsung devices, that sends out a negative message about your products beyond even your own customers. Even now you can bet business schools are preparing to use the inflammable Note 7 as a case study in crisis management.”

Cision’s analysis, which won the AMEC gold award for ‘Most impactful client recommendations from a measurement study’, compared the use of spokespeople in managing the issue compared to other notable crisis management case studies. This research demonstrated how important local spokespeople were to manage these issues with a local audience. Samsung UK used this to feed back to head office in Korea whose legacy cultural instinct was to ‘control’ the messaging via senior management.

Audiences have moved from ‘deference’ to official channels and spokespeople to ‘reference’ of the people that have the on-the-ground credibility.  In a ‘deference to reference’ world, identifying those individuals and aligning their influence with the goals of organisations is increasingly important.

Our key takeaways from CommsCon
We promised that CommsCon would be a day of discussion, insight and debate, and judging by the response we’ve had from our delegates, we are delighted to have lived-up to the [...]
Industry News
Request a Demo and Pricing
Connect on Social:
A new media reformation?