At last night’s PRWeek Global Awards in London, Weber Shandwick won six awards out of 24 and was named  Global Agency of the year. 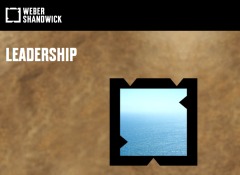 Notable wins for UK work and campaigns included the Consumer Launch award won by Tin Man for its ‘Making Single Malt Fashionable’ campaign for anCnoc and the Global Partnerships award won by VisitBritain and iambassador for the The Social Travel Summit Inverness.

Weber’s UK activity included its #BrutalCut campaign for Action Aid UK, for which it won the Nonprofit award.

Opinion: Why “PR” is having a renaissance
Brendon Craigie, co-founder and managing partner at Tyto PR, examines why PR professionals are once again adopting the PR moniker. The public relations industry is in the [...]
News Analysis
Request a Demo and Pricing
Connect on Social:
Beattie: What if social media could predict the snap election outcome?