Johnny Pitt, founder of Launch and The Creative Shootout, on what is driving the agency’s new positioning and why it is dropping ‘PR’ from its name. 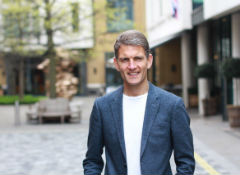 Central to our being at Launch Towers is a passion for great thinking, and this week sees us focus our agency positioning around what we call ‘real ideas’.

We’ll also no longer be Launch PR, but just simply Launch, to reflect the integrated nature of our campaigns and the fact that clients are now wanting their PR activity to take off from a broader communications base and be much more inter-disciplinary.  It’s another small but defining moment in our 16 years.

You could say we’ve had to be defining and ahead of time – since we started trading with an industry first model back in 2001 – as we’ve had the challenge of creating ideas for clients against some of the most dramatic events of peace time.

We set up week of 9/11 and have needed to cut through a banking crisis, the worst recession since the Great Depression of the 1930s, elections – and now of course Brexit.  And fake news – or is it actually real?

And if the world isn’t dramatic enough – the thinking has also evolved against a media scene which is almost unrecognisable from the day we registered at Companies House.   We’ve said goodbye to the Today newspaper (RIP 1995), the News of the World (2011) with the New Day’s day lasting merely weeks (2016). Saturday and Sunday news desks have merged, paywalls have sprung up and journalists have become ‘all-rounders’.

And though the likes of Google Hangouts, Myspace, Bebo and Quora have also met their Waterloo, we’ve embraced Facebook, Youtube, Twitter and Whatsapp.  They’ve now got 1.86bn, 300 uploads p/min, 800 Tweets p/day and one billion users, respectively, at last count. This means those our clients want to reach are bombarded with messages in a way that was unthinkable just a few years ago.

So, real ideas need to deliver – whatever the brief, budget or sector– be it brand reputation change, sales enquiries, online traffic or almost anything else.  And this of course makes attracting and retaining real talent, critical to success.

Opinion: Why “PR” is having a renaissance
Brendon Craigie, co-founder and managing partner at Tyto PR, examines why PR professionals are once again adopting the PR moniker. The public relations industry is in the [...]
News Analysis
Request a Demo and Pricing
Connect on Social:
Opinion: The Big Story vs The Big Idea What does the PR industry need from its leaders?
Scroll to top
Cookie Policy