Alastair Campbell is well known for his anti-Brexit views but he says comms is one industry unlikely to be affected as the UK leaves the EU. He talked to Gorkana at the opening of parent company Cision’s European HQ about his new role at The New European, the secret to the title’s success and how a post-truth society will affect the PR industry. 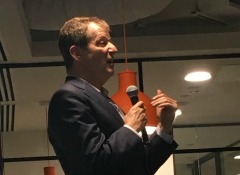 Alastair Campbell speaking at the opening of Cision’s European HQ

Congratulations on becoming editor-at-large at The New European, what’s been the secret to its success?

What’s amazing is it’s a time when everybody says that print is dying! Matt Kelly had the idea and at first instance he set off with limited ambitions but it was in profit without any advertising, any marketing or anything else.

I think it’s because there’s a massive feeling out there that Brexit is going to be a disaster and these guys can put across a different view.

The other thing is so many people want to write for it for nothing. This week I’ve got Nick Clegg’s wife writing about trade negotiations, Jonathan Powell’s writing about the impact of Brexit on the peace process in Northern Ireland, we’ve had Tony Blair, Martin McGuinness, Sturgeon.

Interestingly Arron Banks was in the paper for a couple of weeks and it’s fair to say the readers just went berserk, they didn’t want it. It wouldn’t survive if you didn’t have the passion of the people that are involved in it.

You’re well known for your views on Brexit, but how do you think it will affect comms specifically?

How has comms changed since your time working for the Labour Government?

I guess the biggest change is the omnipresence of the internet. The other big change recently is the whole Trump/Brexit -‘it’s ok to lie’- thing. That’s a big change!  The idea that Boris Johnson can tell a pack of lies about £350million a week for the health service and end up foreign secretary, that was unthinkable 50 years ago.

The whole thing about post-truth is a big change, but I think the real changes are technological. And the other thing is this phenomenon of algorithms pushing us all into ever more narrow silos where we seek out the things we want to hear, and want to read and want to believe. That to me is what populism is, that’s how Trump and Brexit won. It’s about building these networks that just become very polarised and don’t want to know another opinion.

What’s currently the most demanding aspect of PR?

What I say to anyone who’s in public relations is: it’s not about whether you get good press or not. It’s about whether outcomes that you get match what you set out to do and what your strategy is. So, it’s possible to get a very good reputation for what you do while also getting very bad press for what you do.

I don’t confuse bad press with a good reputation. I think I’ve got quite a good reputation, definitely in the industry, but I get a lot of bad press and I have done for a long time. Then you take someone like Rupert Murdoch who owns more media than anybody else, he’s got a terrible reputation but he gets good press.

The stuff I do at Portland for example – I do a lot of mentoring and training – what I say to them is that anybody can write a press release. What it’s about to me is, strategy and how you align your communication with strategy. So, I don’t think that’s changed, I think the landscape in which we’re operating has changed.

You get one option: you can either have your favourite football team, Burnley, stay in the premier league or another EU referendum in two years. What do you choose?

Oh my God. I’m going to go for the referendum – only because Burnley is safe anyway! My son works in data in football and says we’re safe.

Opinion: Why “PR” is having a renaissance
Brendon Craigie, co-founder and managing partner at Tyto PR, examines why PR professionals are once again adopting the PR moniker. The public relations industry is in the [...]
News Analysis
Request a Demo and Pricing
Connect on Social:
Opinion: comms is critical to breaking the modern slavery taboo Opinion: The Big Story vs The Big Idea
Scroll to top
Cookie Policy