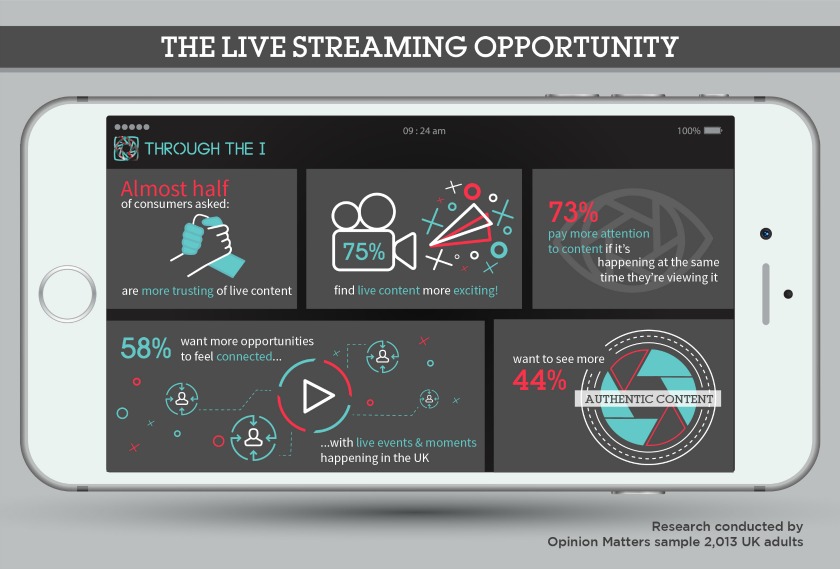 Video content agency Through The I has released research showing that consumers are paying more attention to live streaming than pre-recorded video content. Comms pros from TVC Group, Golin and make-up brand Benefit discuss with Gorkana how live content can be beneficial for PR and how they use it.

The survey, commissioned by Through The I and conducted by Opinion Matters, highlights that out of 2,013 adults 58% are feeling ‘more connected’ with live content than pre-recorded video. Some 73% of respondents said they pay more attention to content if it’s happening at the same time they are viewing it.

“Authenticity is the new currency of today’s media environment,” says Scott Jackson, MD at Through The I. “Driven in part by the rise of the ‘YouTuber’ and blog generation, consumers are demanding more genuine voices.”

Jackson adds that video can be particularly impactful when used this way because it creates an interactive experience – the viewer is able to take part in live polls, see their comments read out by a presenter, or respond to panellists in real-time.

“Consumers are savvier, and now demand more from marketing and PR campaigns – they are more cynical and less likely to trust brands than they have ever been. A live stream, in many ways, is an answer to all of that distrust,” he adds.

The implications for live streaming in PR are still not fully defined. The importance of live content is, however, stressed to Gorkana by comms pros.

“We’re constantly looking for new ways to interest and influence audiences, and we’re seeing audiences respond positively to the format, particularly the opportunity for two-way interaction that pre-recorded lacks.

“This is an extension of the traditional ‘pre – during – post model’, but crucially needs to be considered across all available owned, earned and paid channels regardless of the platform being used,” he adds.

James Myers, TVC’s global managing director, agrees that live streaming can cause ‘a bit of a headache’ for traditional PRs. He says: “Live streaming has changed the role of PR as consumers invariably get to see products being unveiled or launched before editorial stories have gone live.

“Over the last couple of years we’ve noticed that journalists are coming to us more and more asking if they can live stream our client projects on their own channels.  Just last week we were working with a gaming brand on a big launch and a national newspaper approached us and asked to do a live Q&A on its Facebook channel with the creator of the game. This allowed our client to engage directly with their readers in real time.”

To get ahead in this environment, Jackson says that PR and communication consultants who deal primarily in print, digital or social, will need to learn the nuances of broadcast in PR – both in risks and rewards – if they are to properly understand the opportunity. Despite this, he says there are ‘infinite implications for PR’ when it comes to live content and the first movers will gain a great deal.

One area where PR pros have seen a growth in necessity for live content is in the B2B sector. Cooke says the agency has seen notable results with live streaming (compared to pre-recorded) within the B2B space, in particular, despite live streaming with a range of brands.

“Streaming has provided the perfect platform to reinvigorate and increase the reach of traditional formats such as video tutorial, webinar and workshops.

“The popularity of the format has put a real emphasis back on the ‘live moment’ of campaigns, something that often is lost with pre-recorded content, opening them up as shared experiences for audiences to actively participate in,” he says of Golin’s B2B campaigns.

Through The I has also seen growth in the use B2B live content. “We have seen huge growth in B2B streaming and internal comms – we work with global corporations for example, who are using enterprise tools such as Yammer, as a way to build consensus and culture cross-territory in a way that was simply impossible or too expensive to do before,” says Jackson.

Give consumers a ‘front row seat’

“Live streaming is about the here and now, while out pre-recorded video content has other purposes.

“We’ve experimented with live streaming on Periscope, and using Facebook Live with our media and retail partners. We’ve tried a little of everything from office tours to tutorials and makeup Q&As. Consumers are enjoying being able to interact with us within a live setting and get their questions answered there and then,” she adds.

Opinion: Why “PR” is having a renaissance
Brendon Craigie, co-founder and managing partner at Tyto PR, examines why PR professionals are once again adopting the PR moniker. The public relations industry is in the [...]
News Analysis
Request a Demo and Pricing
Connect on Social:
Positive social media coverage increasingly drives charity donations, shows...