Christian Sylt, senior Formula 1 and motor racing journalist, talks to Gorkana about how he kicked off his career in the industry, founding Zoom, the F1 charity initiative, being a theme park industry specialist and the key thing PRs need to know when pitching in ideas.

Tell us about how you entered Formula 1 journalism? 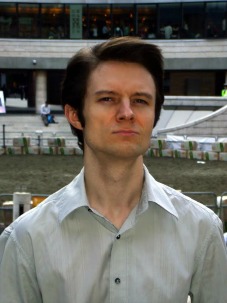 It was somewhat of a coincidence that I began writing about the business of Formula One. I regularly watched the races when I was at university but didn’t set out to write about the sport. My background is as a business journalist and soon after graduating I got a job as a reporter for the Sunday Business newspaper covering the travel and leisure industries. I stayed on after it scaled down and re-branded as The Business under Andrew Neil, but left to take up a similar role at EuroBusiness, a pan-European business magazine.

When I began at EuroBusiness I discovered that it was co-owned by F1’s boss Bernie Ecclestone and in addition to newsstand distribution across Europe it was also available in the paddock at every Grand Prix. As a result, a lot of its content focused on the business of F1 – from interviews with the team sponsors to analysing plans for prospective races.

EuroBusiness closed in the post-9/11 recession and I used the knowledge I had built up covering the F1 industry to begin freelance writing about it for the papers. As I am based in London I started writing for the London Evening Standard, but was soon told that it could not print the volume of news I dig up on a daily basis as it would give too much prominence to a single sport. To ensure that the news was published I started pitching it to The Independent and The Express, as well as the Standard, but soon had to broaden my network for the same reason. Counting dailies, Sundays and magazines, as well as global broadcast outlets like the BBC, I now regularly write for 21 outlets which is more than any other reporter who covers F1.

The decision to begin freelance writing in 2004 proved to be well-timed as the amount of investment in the F1 industry has accelerated since then. The best indication of this is the value of F1’s commercial rights holding company, which is run by Ecclestone and was sold for $2bn in 2005. In February I revealed in The Telegraph that the business had been valued by Ferrari at $8.6bn, which shows how much the sport has grown over the past decade.

The interest in business news about F1 has surged in line with this and to capitalise on it I launched F1’s trade guide, Formula Money, in 2007. This purely contains data and covers all aspects of the industry from the cost of each logo on the cars to the economic impact of the races. I now produce this data bespoke for prospective or existing F1 partners and also supply highlights to the media. In addition to writing for the papers, magazines and online about the business of F1 I regularly comment on the F1 industry on air for the BBC, CNN and CNBC.

What is Zoom and how big is it?

Completely separate to this work, in 2012 I also founded and organise F1’s Zoom charity initiative. Zoom is an annual gala featuring an auction of signed photos taken by all of F1’s drivers and team bosses with all of the proceeds going to Great Ormond Street children’s hospital. Zoom is the only auction of signed photos taken by the stars of any sport and it is one of the only events in F1, except for a Grand Prix, which involves all of the drivers, teams and Bernie.

The galas feature the biggest names in the sport including Bernie, Damon Hill, Max Mosley, Red Bull Racing boss Christian Horner and celebrity fans of the sport such as the Spice Girl Geri Halliwell and TV presenter Charley Boorman. The entire sport embraces Zoom and it has raised £85,000 for Great Ormond Street. It shows that although F1 is renowned for burning through money it also unites to make it for good causes.

Tell us about the calendar of events you cover?

I attend almost all of the Grands Prix as a representative of Zoom and the busiest ones coming up are likely to be Monaco and the British Grand Prix in July. The official Zoom book, which contains all of the photos, occupies the prestigious position of being the only book which is given to all the guests at the F1’s VIP corporate hospitality outfit the Paddock Club at every race. My team is on hand at the races in case the guests have any questions about the initiative and we also arrange meetings with potential sponsors as well as race organisers who commission economic impact studies.

Aside from travelling to the F1 races, I also attend the opening of new attractions in the theme park industry as I am one of only a few journalists worldwide who specialise in writing about it. I cover the industry for the same outlets that my F1 articles appear in and, when I get a chance, I write travel features for them too.

I spend a great deal of time every year in Orlando, the theme park capital of the world, writing about the new developments there and I’m due to attend the opening of Shanghai Disneyland in June. It should be spectacular as it is the largest theme park investment in Disney’s history at an estimated total cost of $5.5bn.

Through writing about Disney’s theme parks I have also developed a specialism covering the finances of the movie industry, which is blossoming in Britain thanks to generous tax breaks and the ready availability of skilled staff. Disney undoubtedly contributes to this industry more than any other company and according to recent research I have done, it has generated an economic impact of more than $1.1bn in Britain by filming movies here. As part of writing about the movie industry I often attend premières and press junkets which makes a change to theme parks and race tracks.

How would you describe your target audience?

Three main divisions to my work – Formula Money, Zoom and reporting – each have different target markets. Formula Money is firmly B2B. The data is bespoke, and not otherwise in the public domain, so it has a high price tag which companies are prepared to pay as they usually need it when they are doing deals worth tens of millions of dollars. They can more than make the purchase price back by using the comparative analysis in Formula Money to save a few percent on the price they eventually settle on in the deal they are doing.

The main PRs that I deal with are those at the teams and sponsors and they are all incredibly professional. They work for large companies in a fast-paced industry so are used to working to tight deadlines.

I am open to pitches for news and features and one of the advantages of having such a wide network is that it allows PRs to cherry-pick the market they would like their news to appear in. This is ideal for brands operating in a global industry like F1.

The outlets I write for range from local papers like the American Statesman in Texas to national papers like the Wall Street Journal in the United States and The Times of London right up to global broadcasters including the BBC and CNN.

Top tips for PRs when pitching?

There’s only one tip: always try to find a news angle as it makes it much easier to pitch to papers. I find that this applies whether I’m writing about F1, the theme park industry, movies or travel.

Opinion: Why “PR” is having a renaissance
Brendon Craigie, co-founder and managing partner at Tyto PR, examines why PR professionals are once again adopting the PR moniker. The public relations industry is in the [...]
News Analysis
Request a Demo and Pricing
Connect on Social:
Gorkana meets…Klaus Fiala and Forbes Austria Behind the Headlines with Clarion’s Shelley Wyatt
Scroll to top
Cookie Policy