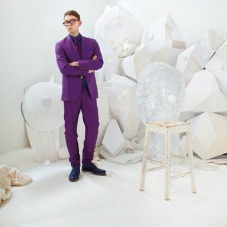 He has also designed headpieces for Comme des Garcons and Lady Gaga, while working with brands such as Louis Vuitton, Diesel, Camper, Wunderkind, Uniqlo and Roksanda Illinic.

His first commission in 2010 was to design covers for Penguin’s Kafka reprints, and, in 2015, he collaborated with Vauxhall to design a 15 foot tall “robotic” Christmas tree made entirely out of car parts that showcased throughout December at the Filling Station in Kings Cross.

Card’s interior design for Dalston retailer LN-CC was nominated for a ‘Design Of The Year’ Award and his work has been featured in the New York Times, Another Magazine, Dazed & Confused, i-D, British Vogue, Vogue Homme Japan, V, POP and LOVE.

Alexander PR has been briefed to reposition Card from set designer to artist and secure a strategic brand partner/sponsor for his first exhibition, which is scheduled for October 2016, in London.

Gaby Moussaieff, director at Streeters London, said: “The further development of our clients’ careers is of paramount importance to us and we’ve briefed Alexander PR to reposition Gary as an artist – taking him onto the next stage in his career.”

Adam Rutherford, Alexander PR director, added: “Gary Card has the potential to be a game changing artist and we’re delighted to be asked to work with him as his career as a contemporary artist evolves.”

Opinion: Why “PR” is having a renaissance
Brendon Craigie, co-founder and managing partner at Tyto PR, examines why PR professionals are once again adopting the PR moniker. The public relations industry is in the [...]
News Analysis
Request a Demo and Pricing
Connect on Social:
Cognito appoints Tilleray as non-exec chair Quintin Keanie returns to MSLGROUP
Scroll to top
Cookie Policy