To promote the launch of Aldi’s new online wine platform, Clarion Communications launched an ‘Apple store’ of wine shops to capitalise on the discount supermarket chain’s sponsorship of the London Wine Week festival. The result? A 47% sales uplift the day the shop opened. 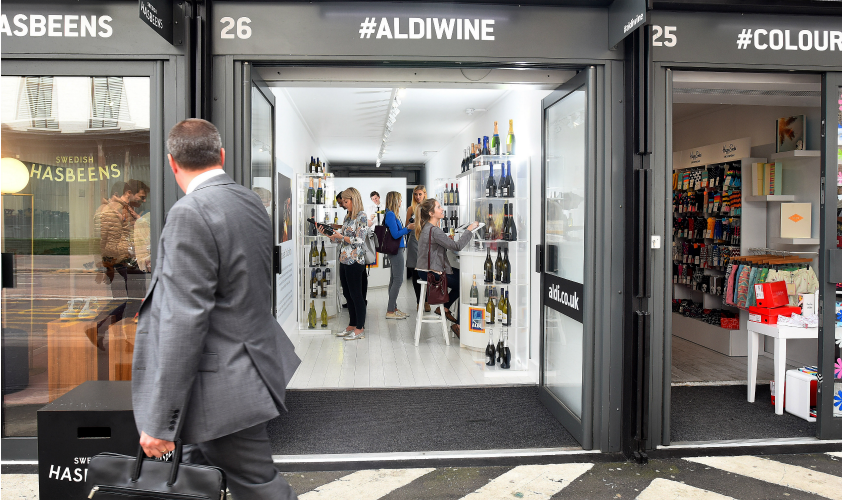 Aldi launched its wine e-commerce platform aldi.co.uk earlier this year and came to Clarion with one business objective:

Clarion’s strategy was to position Aldi as a major player in the drinks industry by having the retailer become the official supermarket sponsor of the London Wine Week festival – a week-long celebration of London’s thriving wine scene. We used this sponsorship as a platform to showcase Aldi’s online wine offering to people in London and the South East.

As well as the sponsorship, our strategy was to create a vehicle which would drive sales of Aldi’s wine online, communicate the quality of the wines, and generate media coverage to raise awareness of the online store.

To capitalise on the sponsorship and grab the attention of London-based consumers, we hosted a pop-up shop, the ‘Aldi Wine Store’, for a three day period at London’s trendy Boxpark in Shoreditch. Shaking up the traditional convention of a wine shop, the Aldi Wine Store represented a refined and futuristic approach to helping shoppers choose their wine – the ‘Apple store’ of wine shops – not what you’d expect from a discount supermarket! Its sleek, minimalistic design consisted of glass wine displays and stations lined with tablets where customers could purchase their favourite tipples to be delivered straight to their door.

To communicate the quality of the wines, customers were able to try before they bought online with a resident Master of Wine – one of only 338 in the world – to guide wine lovers through Aldi’s award-winning range. What’s more, visitors wanting to up their wine knowledge were able to participate in various free masterclasses including an introduction to pairing wine with cheese, and how to identify characteristics of new world verses old world wines.

In the build-up to the store opening, we issued a listings press release to maximise coverage opportunities in London ‘what’s on’ sections both on and offline and ran two dedicated advertorials in key London media: Time Out and Metro.

They provided an opportunity for guaranteed messaging within publications historically less inclined to feature Aldi’s wine offering due to lack of stores in central London. Each advertorial included information on Aldi’s sponsorship of London Wine Week, details on the Aldi Wine Store, aldi.co.uk and a competition to win a pair of London Wine Week wristbands and exclusive masterclasses in store.

On the day prior to launch, we issued a series of photographs to national consumer and trade media – creating vast amounts of coverage.

To drive longer lead coverage of aldi.co.uk, a private media launch was held for consumer journalists from the likes of Woman and Delicious.

The activity also provided Aldi with an opportunity to shout about its wine range on its owned channels; a dedicated page was set up on Aldi.co.uk highlighting the sponsorship and pop-up activity (with a limited-edition ‘Best of London Wine Week’ mixed case sold online), as well as being featured in a dedicated e-newsletter and in multiple social media posts.

Damien Barr from The Sunday Times said: “Aldi promises the ‘Apple store’ of wine at its pop-up event in Shoreditch’s Boxpark. The Exquisite Oz Riesling is a proper zinger. And don’t miss its Blanquette de Limoux – it comfortably outsparkles most fizz at this price.”

London Wine Week Festival director Emma Murphy said: “The Aldi pop-up for London Wine Week 2016 was no doubt a highlight of the festival. We encourage our partners to break the mould and Aldi most certainly achieved this with their forward-thinking concept. The location and design of the pop-up was really well suited to our audience and the execution of the activity both in the run up and during was very cohesive. The feedback from consumers was great and a number of guests cited the Aldi pop up as their favourite part of the festival in our post-event evaluation survey. It was a pleasure to work with Clarion Communications on this project.”

Aldi’s comms director Mary Dunn said: “We are delighted with the London Wine Week campaign. It successfully answered our business objectives in a very creative and engaging way and is a great example of how PR can have a real impact on sales. The online sales uplift as a result of the activity was phenomenal.”