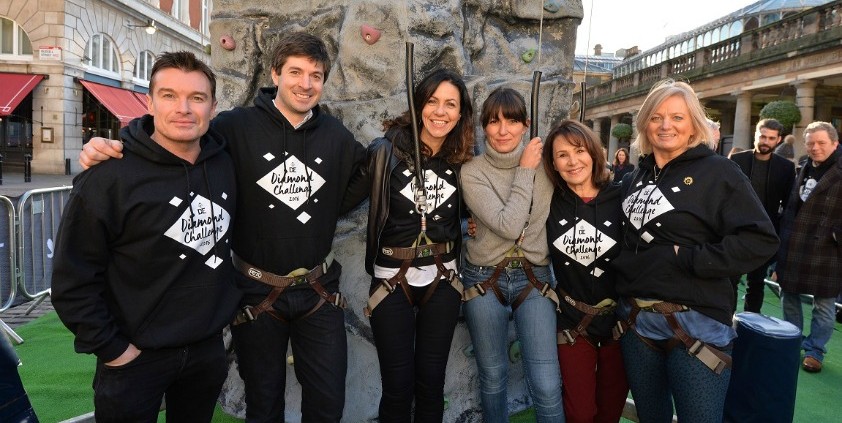 When Stand Agency was briefed to celebrate the Diamond Anniversary of the Duke of Edinburgh’s Award and launch its new Diamond Challenge, the agency enlisted a host of celebrities, including Davina McCall and Arlene Phillips, to climb the equivalent of Ben Nevis in London’s Covent Garden. The results? A 163% increase in sign-ups for the new DofE Diamond Challenge.

The Duke of Edinburgh’s Award (DofE) is the world’s leading youth achievement award.  Open to 14 to 24-year-olds, the DofE has inspired and transformed the lives of millions of young people from all walks of life in the last 60 years. From volunteering to physical activities, life skills to expeditions, achieving a DofE Award helps build a path to a brighter and more confident future.

To help celebrate its Diamond Anniversary and launch the Diamond Challenge, the charity appointed Stand Agency.

For 2016 only, the DofE is running the DofE Diamond Challenge. This initiative encourages people of all ages to take on a DofE-inspired challenge, aiming to increase the profile of the charity while at the same time raising vital funds that will allow the DofE to achieve its Diamond Ambition of reaching two million more young people by 2020.

The campaign objectives were to use traditional and social media to:

To launch DofE’s Diamond Anniversary in a high profile way and bring key messages to life we knew we needed the help of some famous faces, as well as some DofE participants with amazing stories. We set about recruiting celebrity ambassadors and making contact with case studies and spokespeople to build up a bank of supporters ready for launch.

At the same time, we reached out to long-lead publications to make sure DofE was on their radar for 2016, as well as soft launching the Diamond Challenge amongst the DofE network and supporters using targeted media coverage, DofE’s own comms channels, and social media.

To create a strong news angle, we commissioned polling to understand why people like to overcome personal challenges and we examined to what extent people in the UK believed they challenged themselves in 2015.

We also planned a visual ‘stunt’ for the January launch in order to create a striking photo opportunity.
We set up a climbing wall in Covent Garden and, in keeping with the ‘expedition’ theme of the DofE, the target for the day was to climb the equivalent of Ben Nevis, and back down again.

The Charity’s celebrity supporters – Davina McCall, Julia Bradbury, Jon Culshaw, Alice Beer, Arlene Phillips, Matt Johnson and others – took to the climbing wall first, followed by members of the public who were encouraged by our street team.

Packaged up, along with the celebrity ambassadors and powerful case studies, we had a strong offer with lots of angles to take the media as well as for social and online content.

Celebrate and launch the Diamond Anniversary in style:

The hugely positive response from DofE staff, and its wider network, was helped by strong regional coverage highlighting DofE’s work across the country. We secured 189 pieces of regional print and online coverage and 16 local radio interviews featuring inspiring DofE spokespeople and case studies. The BBC’s general news service picked the story up and offered it out of stations across its network.

Traditionally, DofE’s coverage outside the education; charity; and outdoors press has been limited. We took DofE to a new audience: reminding them that DofE is a charity; explaining why DofE is more relevant than ever; to a wider range of people than ever before; and demonstrating the organisations’ impact; along with a clear call to action.

Some 12 pieces of national print and online coverage were secured along with three national broadcast hits, including The Telegraph, The Times, the i newspaper, BuzzFeed; the Evening Standard, Sky News and Good Morning Britain. The total potential reach for the campaign was 129,769,122.

During the campaign period there was a 163% increase in sign-ups to DofE Diamond Challenge.

Got a cracking campaign – with impressive results – that you’d like to showcase? If so, please email [email protected].