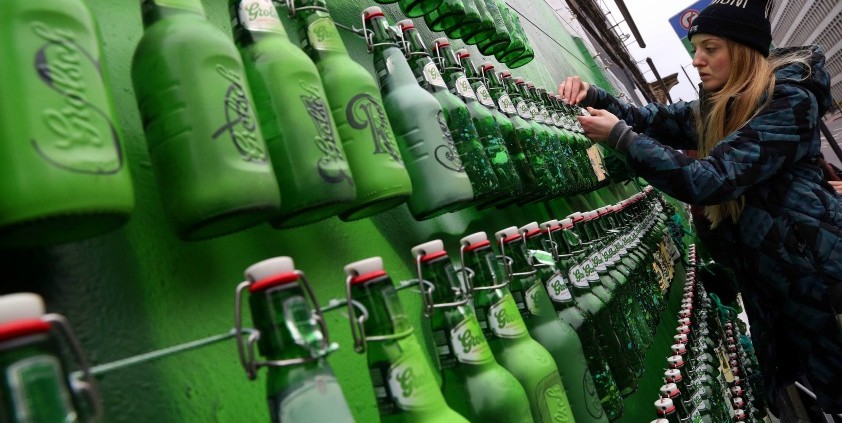 To celebrate Grolsch’s 400th anniversary this year, Eulogy, with the help of street art collective Graffiti Life, decided to grab the attention of 25 to 34-year-old drinkers by creating a “living billboard” featuring a giant swing top bottle made from 400 of its distinctive swing tops in just 400 minutes.

There aren’t many brands that have stood the test of time like Grolsch. Its success over the past 400 years is due to the brand continuing to deliver a premium product that is true to its original roots. The essence of this is captured beautifully with the Grolsch swing top bottle; a bottle which has been used from the very beginning and is still synonymous with it today.

Molson Coors, which also owns Coors Light and Singha, as well as Grolsch, brought in Eulogy earlier this year to mark its 400th anniversary with a campaign that would put the Grolsch swing top bottle centre stage.

The objectives were to make the global Grolsch 400th anniversary campaign famous in the UK, ensuring art, originality and the swing top bottle were key themes in the UK activation. Grolsch wanted to reignite consumers love for the brand, specifically targeting 25 to 34-year-old drinkers.

Our inspiration was to create a one-of-a-kind stunt that communicated the originality of the Grolsch brand.

With art as an existing global platform for Grolsch, it made sense for this to be the springboard for the activity. As thoughts around the swing top bottle, art and the need for a celebration collided, we decided on a stunt that built excitement, was a truly unique and showcased everything Grolsch stands for.

Creating a giant swing top bottle from 400 individually customised swing tops as a living billboard, all in the space of 400 minutes, emphasised the anniversary in a fun, creative and engaging way.

Enlisting the talent of street art collective Graffiti Life to bring the concept of a live art installation/billboard build to life, we identified and secured a high footfall location that the target audience sees as trendy, relevant and inspiring for the activity – the Shoreditch Art Wall.

The element of a challenge – the build used 400 uniquely designed Grolsch swing top bottles and took place in 400 minutes – added a news hook for the media and developed a shareable story for passers-by over the course of the build.

We pre-sold the story to key targets to ensure live coverage during the build and to secure coverage of senior brand team members, who were on hand, on site for the duration.

By creating such a visually compelling stunt we also generated brilliant content so the beauty of it could be shared across all channels. It wasn’t just the passers-by, who shared their enjoyment on Instagram and Twitter with images of the build in action, who loved it. The media loved it and, crucially, the trade loved it too.

Make the global Grolsch 400th anniversary campaign famous in the UK, ensuring art, originality and the swing top bottle are part of the UK activation: