I always know a Mediatel event is going to be a cracker, and the one I attended yesterday did not disappoint. The annual Media Playground conference consisted of thoroughly interesting guest speakers, a friendly audience of media industry types, intriguing questions and a bit of laughter along the way. Oh, and let’s not forget those bright green Martinis…

Mark Field, the Director of Invention at Trinity Mirror, took us through a case study of marketing he created for the Sky TV programme “You, me and the Apocalypse”. He told us how his role is to editorialise brands, creating content that matters to and inspires their audience. They serve “Modal Britain” – which is the middle 50%, and focus on the “3 B’s”:

MF confirmed that content briefs are getting bigger, so they need to show the value of its worth.

For “You, me and the Apocalypse” he used a form of advertising he called “disruptive content.” He showed examples of asteroids blasting through newspaper mastheads, and TV listings which stopped after 9pm – because the “Apocalypse” would have happened by then. Even editorial spreads inspired by the programme were put alongside usual news stories in the papers.

Torin Douglas, a Media commentator, enquired about journalism: a lot of journalists think editorial and advertising should be separate, that writing is sacrosanct.

MF confirmed he works closely with editors and strives to strike a balance; figuring out what works for the reader.

Understanding and leveraging your audience data

Dominic Mills, a Mediatel columnist, kicked off the next section by turning the focus to data. He spoke of the need to use data intelligently, rather than through volume.

Steve Sydee, the Business Development Executive of IMGROUP, somehow managed to make his presentation on data – let’s all admit a pretty dry subject – rather interesting. He said the first thing you need to think about when it comes to data is what you actually want out of it: business intelligence – correct, consistent and connected.

He uses four steps for data collection: identify, connect, clean and master. A couple of examples of how to obtain information on customers to better their experience: wifi registration, Disney’s “magic bands” and membership cards. And from these, he said, you can create apps, discounts, online tour guides, and even a “Marauder’s Map” e.g. to track family members in a shopping outlet. SS’s two main tips:

Jim Hodgkins, the Managing Director of VisualDNA, was  all about knowing the psychology of customers.

He implored that digital advertising needs to improve user  experience – “we believe people’s personalities are key to  this”. Creative programmatic is a major opportunity, with a  proven 50% increase on ROI. The big 5 personality types  VisualDNA focuses on are:

They combine this with demographics, interests, intentions and personalities. He predicted that understanding and using personality drivers such as the above is the next big thing in advertising which has not been used yet…

Is this the future for social media?

Next Anthony Rose, co-founder and CEO of 6Tribes, gave a humour-filled presentation on social media (including using a list of “top pet peeves on social media” with one of the answers being “lists”).

His research had found that in advertising, no one was talking to individuals. This meant:

This is where his new app 6Tribes comes in – instead of having a full feed of everything from anyone you follow, 6Tribes allows you to search and follow by topic.

The Internet of three things

I fully admit that after this conference I totally showed off about meeting a “Futurologist”. Tracey Follows (an apt name if I ever heard one) presented to us her prediction of the future of technology (not Mystic Meg style though – more data, charts, scientific research etc).

“Nothing is as transformative as the Internet of Things. The potential to change our everyday life is vast. It has been likened to the Industrial Revolution”.

She predicts that in the future there will be a platform for all things, and this perhaps is the cornerstone of Facebook’s strategy.

And now for the scary part (or exciting, depending on how you view things): The Internet of Thoughts – where technology will be embedded into humans. She used an example of thinking of a question and the technology inside you answering it immediately. This is genuinely plausible, but the timescale of this happening is what is debatable.

She thinks data will evolve:

This will mean “brands in the brain” – marketing will move from technology to biology. Capitalism will only get stronger, there will be more part-time work, although the concept of “weekends” would no longer exist.

But let’s think about the next five years: The Internet of Trusted Things. The more connected we are, the more vulnerable we are, and the cost of data mismanagement could be detrimental. The question she left us with:

“Can consumers trust the Internet of Things?”

So, what do our industry experts think of all this?

Nicky Bullard, the Executive Creative Director of LIDA said the IOT is useful, if it makes our lives easier.

Paul Rowlinson, COO of Mindshare UK, thinks it is exciting although he resents how dependant he is on technology.

Nick Baughan, the CEO of Maxus, said brands need to get on top, with automatic replenishment. They need to focus on preference.

PR stated that agencies will need help. Wearable technology can now process emotions – but it’s what we do with that data that is important.

Nicky Bullard said there’s too much data. It’s all about relevancy. But it is exciting – creative agencies are becoming inventors.

Tracey Follows sees that start-ups are becoming all about the experience, with consumers having a say in creation. Bigger companies, however, are finding it harder to innovate whilst keeping the status quo.

TF continues by saying that more people (especially the young who are growing up with screens) are seeing technology as the truth and advertising as the liar. Whereas it’s probably the other way around – ads are public whereas technology is behind the scenes. Generation Z believes everything they see on screens.

After some 5 minute pitches from 4 different start-ups and a break for lunch, the conference continued with Kate Burns, the General Manager of Europe at BuzzFeed, interviewed by Torin Douglas.

Yes, some obligatory cat chat was mentioned (who doesn’t like a listicle of cute cats? Well me, I’m allergic, but I seem to be in the minority). Kate spoke about the vast different topics the site covers – yes, adorable animals, but also serious journalism.

“We are a content company – we serve the masses”.

The figures prove this: they get 2.5 billion views a month worldwide. She thinks the success is partly down to the fact they have perfected the production for mobile devices. Before joining the company, KB was drawn to the way that Buzzfeed isn’t obsessed with driving you to their site. They’ll serve the content you want to see.

TD stated that nobody is investing in journalism anymore… except Buzzfeed is. KB thinks news sites which are protected by paywalls “inhibit experience and in a lot of ways growth.” Buzzfeed uses native advertising only.

Simon Andrews, the founder of Addictive!, started his presentation by saying that mobile is mass market and mainstream – everyone has one! He did implore that mobile is not selling its virtues. We should get creative people involved; and video is the way forward.

After a short presentation by Anne Tucker, the head of research at Mediatel, where she spoke of their new product Connected Screens (media neutral, consumer centric and it includes every screen), Brian Danzis, Global Chief Revenue Officer of Virool started his presentation with a strong statement:

Que humorous Gif to reflect this. Don’t worry – he followed up with “but I love ads”. He said if we don’t change something soon the subscription model will usurp normal advertising.

He coined the word “Advertainment”. Advertisers need to connect with human emotions – it drives 90% of our thought activity and decision making. Authenticity matters and emotionally connecting is important.

Sky AdVance
Jamie West, Deputy Managing Director at Sky Media, says most channels see their audiences as customers and not viewers – which is where Sky differs.
Targeted and contextual advertising returns good investment and ethicacy.

To finish the day, Graham Lovelace, Director of Lovelace Consulting, said there seems to be a Silicon Valley view of TV. Netflix is television – we’re just having an existential crisis of definition. He continued by saying with the introduction of ad blockers we almost came close to Adpocalypse. When really, if you think of the John Lewis advert, the production can be similar to a beautiful little film.

Summary
From a close-call Adpocalypse to the surge of Advertainment, I learnt a lot at yesterday’s conference. Many interesting thoughts from our industry experts; it seems to succeed with advertising and technology in the future companies have to advance and adapt. And let’s not forget human-imbedded technology. “Brands in the brain” is a very real concept, although I think you’ll agree a little bit scary… 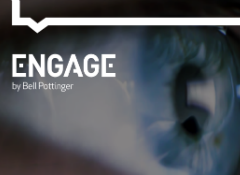 Trends and solutions for 2017 at Bell Pottinger Engage launch
As it launched its integrated practice Engage this morning (January 25), Bell Pottinger – with The Future Laboratory –  outlined five trends and resolutions likely [...]
Industry News 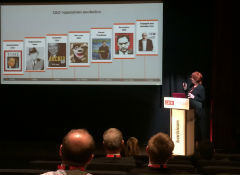 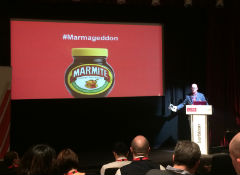 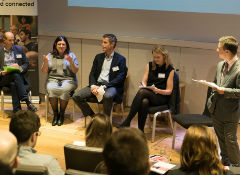 The PR agency of the future panel event
At an exclusive panel event last night, agency and industry leaders from Ketchum, Edelman, Hanson Search and Gorkana looked to the future and discussed what PR agencies will [...]
Industry News
Request a Demo and Pricing
Connect on Social:
Agencies: Your future in the face of digital