“GQ is always trying to improve the lot of its readers…and fashion is core.” At a Gorkana breakfast briefing, GQ’s online editor, Conrad Quilty-Harper, and engagement manager, Becky Lucas, revealed how the title has evolved since it launched in the UK in 1988, the synergy between GQ and James Bond, and why PRs need to think exclusivity when pitching to the team. 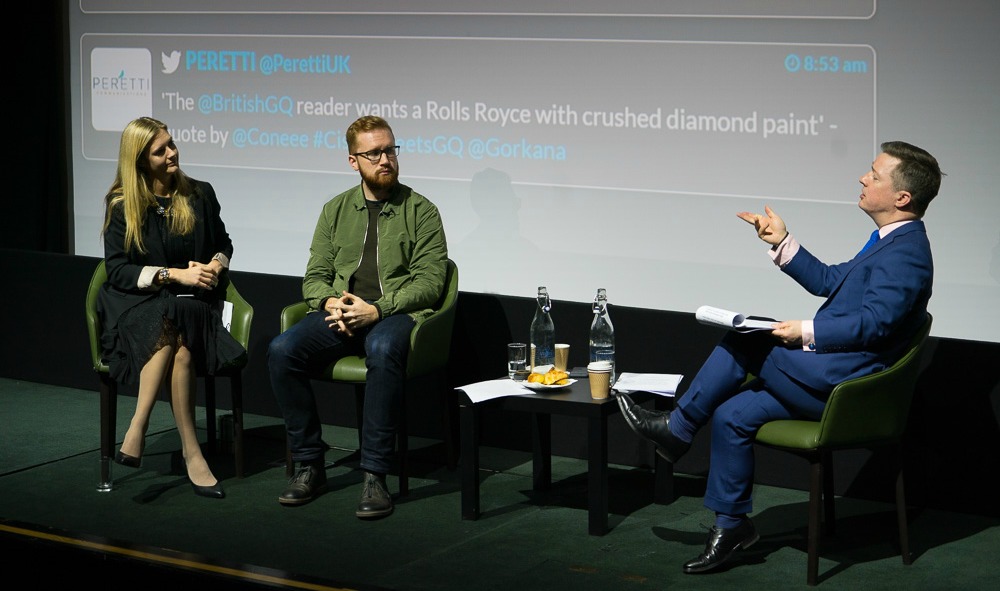 First published in the UK in 1988 with Michael Heseltine on its launch cover, GQ is aimed at ABC1 men aged between 20 and 44, has a 400,000 monthly readership, with online boasting over 2.7 million monthly unique users, and more than 1.1 million social followers.

The title says that 83% of GQ.co.uk users have influenced others to purchase their recommendations, and 88% have bought or plan to buy products they’ve seen in GQ.

GQ’s online audience is twice as likely to be ‘high net worth city workers’, who are 64% more likely to be early adopters of technology.

Here are just a few top tips that Conrad Quilty-Harper and Becky Lucas from GQ’s online team revealed at the media briefing, which took place at Regent Street Cinema in London:

“The GQ man likes things that every other man likes, but they want the best…it’s about escapism,” said Quilty-Harper. “If a man wants to buy a £500 jacket, he’ll come to GQ.” According to Lucas, GQ men don’t look at gift guides, but women do visit GQ.co.uk to get an idea of what they can buy the men in their lives.

Audiences want crushed diamond paint, they want to read about exclusivity and @BritishGQ can provide that escapism! #cisionmeetsGQ

The GQ team is currently working on a six-month experiment project on what works in terms of video for the title. It’s in-house video team is happy to receive B-roll footage or suggestions for locations to shoot, especially around fashion. Access is very important for video, whether it’s a celebrity for your campaign or an exclusive shoot around a new product.

Interesting to see the changing role of the agency, with @BritishGQ taking video content creation in-house. Benefits vs risk? #cisionmeetsGQ

Exclusivity is the watchword for GQ. It’s the difference between the team saying yes or no to a pitch. If they can get their hand on a new album or artist video 24 hours before their competitors, they are likely to say yes to covering them.

“Do your research, find the right person and be relevant when pitching,” says Quilty-Harper. The subject line needs to tell him exactly what it is that’s being pitched to him otherwise he’s unlikely to read on. Also, if it’s from someone he’s already built a relationship with, he’s more likely to give it some attention. A bugbear for Lucas is when she receives an email that isn’t addressed to her and doesn’t get to the point.

"I appreciate PRs that are patient… It's that understanding that I love." @Beckyamylucas #CisionMeetsGQ

More than 220 PR and comms professionals attended the media briefing, which was chaired by Gorkana’s head of news and content, Philip Smith.

Michael Bradley, senior account manager at Havas Life Medicom, said: “Both Conrad and Becky provided insights into the challenges of meeting the expectations and differing needs of print-based and online content.

“It was fascinating to hear them discuss the changing demographics of a primarily male-focused publication in a world increasingly, and positively, rejecting gender stereotypes.”

Madeline Lupori, an intern at content marketing agency the tree, said: “Being a top worldwide publication, GQ is a hard to reach. The briefing was informative as Conrad and Becky gave insight into the content they are looking to publish, a deeper understanding of their readers and how to sculpt the best pitch. After the briefing, GQ doesn’t seem as distant.

“It was a packed house, filled with eager and well-dressed PRs. Conrad and Becky’s openness and great insight about the publication led me to walk out of the briefing with more confidence when pitching to GQ.”