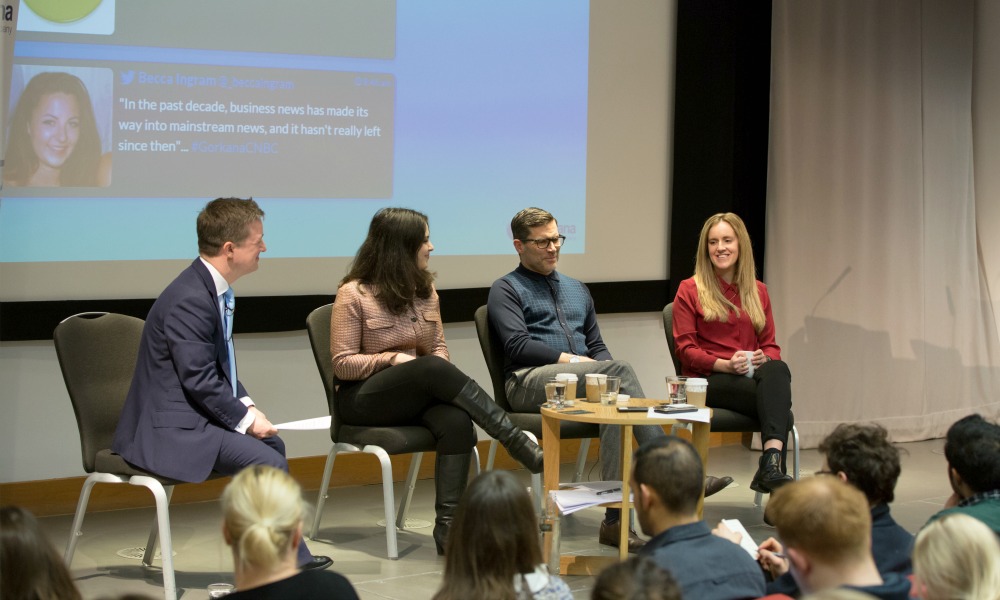 CNBC International looks to run stories that both move markets and affect people every day. Just one of the key messages that were heard as Gorkana hosted a media briefing with CNBC International’s news editor, Katrina Bishop, social media editor, Cristy Garratt, and digital managing editor Phillip Tutt, on 27 January.

Daily, CNBC International operates four hours of programming out of London with three of those dedicated to the flagship Squawk Box Europe show. In addition, CNBC.com offers users 24/7 business and financial news online. The site also features a new live blog, which provides users live updates throughout the European Trading day and is expanding its reach, according to Tutt.

Overall, the channel’s viewers are predominantly business people keeping in tune with the latest European business and financial news. Each month CNBC reaches a high-level audience of 5.9 million of Europe’s top 20 per cent of income earners each month.

In an exclusive conversation with Philip Smith, Gorkana’s head of news and content, editors Bishop, Garratt and Tutt offered advice to comms and PR professionals on how to pitch stories, target the right audience and look past the trends. Here are a few key points from the briefing:

“If for whatever reason you won’t give us the first interview, then unfortunately we would have to turn it down. There’s no sense of animosity there and we usually use that as a springboard to when next we can speak to them. But, if you want the person on CNBC on that day it has to be a first,” she added.

When it comes to CNBC’s digital outlets the editors follow the same ethos, Tutt said: “It depends on the strength of the story. If you have the CEO exclusively or first on the air we will also get that first on the website as well. CNBC.com is also a great arena for CEO/CTO/CMO opinion pieces as well; we can always promote and push those heavily. We work in tandem when it comes to breaking news with the TV side.”

Global perspectives and stories are valuable

Bishop’s favourite recent story was about a small sunglasses company in the UK moving into the Iranian market. Why? Because it has two elements that she defines as essential for the CNBC audience; a story that is about business and has either a global or European reach. She went on to explain what makes a good story for CNBC:

“The perfect story is a story that both affects markets and affects people everyday so that’s why one of my favourite stories every month is about inflation figures.

“Also, luxury stories do really well. When you think about our viewers they’re people with money so they’re the ones who are going to want us to be talking to the luxury handbag makers and the cinema and film industries.”

Trending stories often lead the editors to look for alternate ways of covering the markets. While they will never refuse to cover these sectors, they need fresh angles and insight to do so.

Bishop said: “I hate to say it but there probably is a fintech fatigue but it’s only because it’s such a hot topic.

“The number of press releases I get in a day is ridiculous, but if a London based fintech company has just raised £500 million then we’re really interested. So, do stay in touch but not every fintech story is going to get on because there are so many.”

CNBC’s audiences are firmly in the C-suite and both high-level in stature and earnings, Bishop said: “We have the kind of CEO/CMO/CFO community and also the kind of people moving the money, so the trading floors, the people in the city in London and across Europe, they’re the people watching us so obviously our favourite stories are the ones that move the markets.”

Garratt revealed that there is also a market for millennials at CNBC, particularly on social. Some 60 per cent of CNBC International’s followers are millennials: “But, they’re also really successful millennials which more than half of them have a household income of over £75,000 and 70 per cent are already homeowners so keep in mind that demographic when you’re pitching to us,” said Garratt.

Ked Mather, MWWPR attended the briefing and commented: “A very informative session from CNBC. The renewed emphasis CNBC places on digital and social is particularly interesting, to reach new audience – and something which I was not aware of. I will certainly be attending more Gorkana media briefings in the future.”

Hanover’s Chris Calland added: “Yet again Gorkana has delivered a really insightful event where you don’t just get the inside track on a media outlet’s current thinking, but insight into what it might be doing next and what all of that means for your PR strategies.”