When British online fashion platform Lyst wanted to be identified as the brand that “did things differently”, Pitch came up with The Lyst Canine Collection, with puppies and dogs on sale as accessories. A clever hoax, the eye-opening campaign aimed to highlight the huge rise in the abandonment of dogs identified by animal charity The Blue Cross, while showcasing Lyst as a brand that refuses to “play it safe”.

The Canine Collection was a unique and controversial campaign centred on Lyst’s plan to ‘become a challenger brand that does things differently’. The brand wanted a creative activation that would get Lyst talked about, increasing social and website traffic.

The campaign dominated social and traditional media for the two days it was live. It sparked huge debate with animal lovers and fashion fans alike, raising awareness of puppy farming and the rise in ‘designer’ dogs in the process.

While other fashion brands play it safe, we created an interesting and eye-opening campaign that engaged more consumers than anything Lyst had ever produced.

The Blue Cross animal charity recently revealed the news that dog breeds traditionally thought of as British family favourites could be overtaken by ‘fashion breeds’ on rescue centres’ most unwanted lists.

They said: “The face of dog ownership may be permanently changing, and we worry that the influence of celebrity owners and fashion trends means many more pets are bought for the wrong reasons and soon given up.”

We used this insight to raise awareness of the fantastic work that the Blue Cross and other animal charities do, while raising Lyst’s profile in a provocative way.

We knew that in order to have cut-through with the right amount of controversy, we had to spark mass conversation before finalising with a positive outcome.

With that in mind, we worked with Lyst to create a mini-site on their website – alongside the accessories section – that would appear to market and sell puppies and dogs as accessories. Lyst ‘stocked’ 33 different dog breeds and consumers could narrow their search by colour, size and style. We also created a bespoke Canine Care customer service that would respond to all enquiries and work with the potential buyer to find the right dog to suit their style.

To coincide with the website and social media launch, we also delivered a media drop, or “Puppy Drop” as we called it.

We visited ten different media houses with puppies in bespoke Lyst boxes, complete with Lyst bows, ribbon and price tags. The objective of this Puppy Drop was for media to experience a ‘taster’ of Lyst’s Canine Collection.

We needed to create something that was on brand and matched Lyst’s cheeky reputation, while still having that slick, classy and fashionable feel. Although it was a hoax campaign, we needed the content to appear as believable as possible. It needed to be incredibly stylish – just like Lyst.

Lyst wanted to execute this campaign as soon as possible, so it was all systems go after the initial pitch. Our first step was content creation.

We worked with fashion photographer Tom Griffiths to produce a series of lookbook-style images that would be used for PR sell-in and for the website. The images were shot around Soho, using three female models and five puppies and dogs. All clothes and accessories were sourced from Lyst’s stockists and were shoppable on the site at that time. This added another layer of credibility to the campaign.

During the photoshoot, we also shot a campaign video and edited this in-house to launch alongside the website and lookbook images.

Along with the photo and video content, we also produced the announcement and reveal releases and the Puppy Drop gift boxes.

The campaign ran for two days:

The campaign culminated with the hoax reveal. Of course Lyst weren’t selling dogs online – we were in fact highlighting the massive rise in the abandonment of dogs (3.9million+ a year). After all, a dog is for life, not just for Instagram.

Although a very short campaign, the Canine Collection was covered by the biggest and most influential media outlets across the UK, Europe and US. 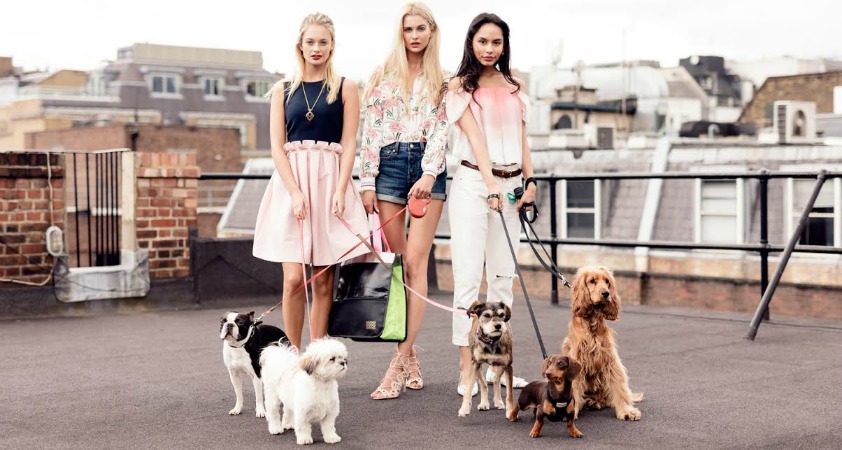 The “Lyst Canine Collection” on display

Christian Woolfenden, chief marketing officer at Lyst, said: “Pitch excelled themselves with Lyst’s ‘Canine Collection’ campaign. From the moment they first pitched the idea to us, we knew they were barking up the right tree, and when it came to the execution, Pitch really delivered. Throughout the campaign they matched the right levels of authenticity with Lyst’s tongue-in-cheek tone of voice to ensure our most distinctive campaign yet delivered a measurable business impact.

“You can’t argue with a 120% uplift in direct traffic, or the fact that we had more Twitter impressions in two days than we had in six months last year.”